Parallels remain, but the songs are not the same. Conquering Animal Sound’s second album finds Glasgow’s James Scott and Anneke Kampman expanding their electro palette, sounding distinctly bolder, although echoes of influences are still as evident as their individuality.

But a little familiarity benefits On Floating Bodies. Without the whispers of early Efterklang in the twinkling keys and taut, synthetic percussive patterns, these compositions might convey only a distanced, mechanical cool.

The warmth of its predecessor, 2011’s Kammerspiel, is less evident across these 11 tracks – but, then, the organic constituents of the group's debut always seemed the product of a work-in-progress musical mindset. They enabled an easy lineage to be drawn, back through Scottish forerunners emphasising experimentalism in their indie rock.

On Floating Bodies steps to a more confident beat, certain of its stride within buzzing and humming machinery. This is an electronic record, from its steely surface to its chattering CPU, a vision of pop music siphoned through the more outré corners of Robyn’s catalogue. Built from the ground up, it doesn’t trade in shop-bought samples.

If everything seems controlled and calculated on an initial listen, some patience may be required to pick the locks and uncover emotion nestling within the wires and whirrs.

Ipse is the standout moment of human presence setting circuitry in its shadow, Kampman’s lyrics accompanied by the gentlest sighs of background processors.

Before these second-half glimpses of humanity, though, On Floating Bodies adopts a more confrontational posture. Anyone anticipating fare comparable to fellow townsfolk Chvrches might be surprised by just how sharp this music’s gleaming edges are.

Ultimate Heat Death of the Universe wavers as its power supply fluctuates, but an ominous drone beneath the more mobile constituents is ever-present. No Dream is an android marching band pounding the mulch of a scrapheap jungle.

None of this will be difficult to those schooled in The Knife, or Niki and the Dove’s less-immediate work, but it’s far from cuddly electro-pop.

Not always comfortable, but consistently engaging, On Floating Bodies is an example of a band channelling influences in commendably creative style. Persist and there’s real beauty to be found in its digitised designs. 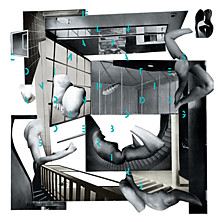