Their growing virtuosity and accessibility deserves to win them a wider audience.

With their riotously entertaining gigs, this Berlin-based ‘orchestar spezial’ have been charming an ever-growing international audience since 1995. Theirs is a quintessentially European melange of styles, and having three lead singers who all switch between German, French and English makes them sound like several bands rolled into one. In spite of their name, there are usually a dozen of them onstage, playing an eclectic range of largely acoustic instruments, although this latest CD features half as many guests again.

Phantom Songs is only their fourth studio album and sees their combined songwriting efforts becoming gradually less quirky and more tuneful. The moods range from pensive to playful, and the diverse arrangements for brass, accordion, a plethora of stringed instruments and more are especially pleasing.

The expectant rush of Ton Étrangère makes for a strong opener, featuring the first of Kiki Sauer’s sensuously intoned vocals, which wander between alt-chanson and German cabaret. The Balkan Gypsy influence that’s been more prominent in the past is largely confined to Biese Bouwe ("Bad Boys"), an adaptation of an Albanian folk song that finds Dirk Trageser coming across like Rachid Taha singing in German. Having an English mother and a German father seems to have made 17 Hippies’ other main singer and songwriter Christopher Blenkinsop equally comfortable in both languages. His softer, more wistful tones are best showcased on The Train, one of several songs that venture into Americana. The droll humour that pervades their music is obvious here ("I’ve got a hat on, do you like my shoes?) and – even without the lyrics translated into all three languages in the CD booklet – also apparent on the laconic Moi.

It’s a shame that the lovely, evocative Singapore (not the Tom Waits song), with its jaunty banjo and keening clarinet solo by Antje Henkel, is the only instrumental. The only cover is a version of Captain Beefheart’s Gimme Dat Harp Boy, which pales in comparison to the unhinged original and is less adventurous than the oddball take on The Shadows’ Apache on their 2007 album Heimlich.

While it’s hard to see them crashing into the UK top 10 any time soon, 17 Hippies’ growing virtuosity and accessibility deserves to win them a wider audience. There used to be no substitute for seeing them live – where they are in their element – but this comes quite a bit closer. 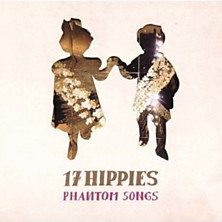