The Knife with Mt. Sims and Planningtorock Tomorrow, In a Year Review

Okay, on paper it does sound a bit complicated, esoteric and, frankly, a bit bonkers: an opera, commissioned by a Danish performance art group, based on the theories of Charles Darwin, made by Swedish siblings Olof and Karin Dreijer, alias The Knife, who are better known for digital art pop and for donning spooky plague masks than for their insights into genetic mutation. Oh, and it also features three guest vocalists, including an operatic mezzo-soprano and some obscure electronic mates from mysterious Mitteleuropa and, er, Bolton.

Sure enough, complicated, esoteric and, yes, really quite bonkers, it turns out to be. By the same token, Tomorrow, In a Year is also a work of vaulting ambition whose ‘seriousness’ is written on its metaphorical sleeve and whose sense of gravity and ascetic rigour give Scott Walker’s Tilt or The Drift a run for their artily uncompromising money.

Based on field recordings (some captured by Olof during an expedition to the Amazon rainforest), the genetic tree diagrams of arch Darwinian Richard Dawkins, birdsong patterns, and lines form Darwin’s personal letters, it’s a two-disc marathon that gives up its riches only slowly, evolving (what else?) as it goes. It begins in austere fashion, the self-explanatory Intro proffering the infinitesimal dripping of the primordial soup, while the succeeding Epochs presents abstracted, monolithic synth drones and Geology, Upheaved, Minerals and Ebb Tide Explorer all do their titles justice. Variations of Birds follows, and just when you think you’ve got the measure of its clanging metallic dissonance the soprano voice of Kristina Wahlin swoops vertiginously in from stage left, its incongruity both captivating and disconcerting as she glides over eddying loops of atonal feedback.

The second disc offers more operatic beauty set against jarring soundscapes, although the Stygian mood abates for the exotic percussion, bowed strings and rhythmically interlocked vocal patterns of Colouring of Pigeons. Several marginally more orthodox, non-operatic songs follow, with Karin finally taking the mic. Almost jaunty closer The Height of Summer actually sounds like a lost Depeche Mode song. Whether that counts as evidence of evolution is, like much of this curious album, a matter for debate. 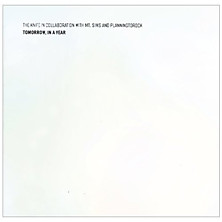