Various Artists Whatever Gets You Through the Night Review

A collection of Scottish artists’ songs for the wee small hours.

When you hear an album like this, you can’t blame the Scots for feeling they’ve been getting a raw deal from being part of a united kingdom, and not just politically speaking.

On the evidence of the 15 acts showcased here, the rest of us may have seriously neglected the talent currently thriving north of the border. That, or maybe they’re making some of their best music while everyone else is asleep.

That’s the suggestion of this compilation, which features many far-from-famous names, but some beautifully turned tunes, which, as the title suggests, are all inspired by the hours between midnight and 4am.

Conceived as part of a joint multimedia venture by arts venue The Arches and indie label Biphonic, this 16-track album partners the theatre production of the same name that ran in Glasgow earlier this year. Yet it works well in its own right as a patchwork of snapshots from a world behind the deep-fried clichés, one instantly recognisable to down-and-dirty stop-outs and lovelorn insomniacs everywhere.

Withered Hand’s gently touching brand of acoustic despair dances two weary horn-laden waltzes at either end of the album, but in-between, all human life is here. Grabbing the attention like a drunken fishwife in search of a spare ciggy is Chips and Cheese, the tale of a drunken minicab search for the titular Glaswegian post-pub snack penned by ex-Vaseline and Scot-pop ace Eugene Kelly.

Subtler charms lie in wait from Deacon Blue refugee Ricky Ross and his yearning North Star, and Meursault’s equally desolate A Kind of Cure. Elsewhere, Laura Lewis croons a lullaby populated only by “a plastic bag... dancing on the wind” on a night that “slept in its make-up”, and Seafieldroad’s wintry atmospherics on The Palace of Light are equally intoxicating.

But we’re regularly jolted awake from such reveries by noisier neighbours such as electronica oddballs Conquering Animal Sound and Errors’ stomping math-rock, while Wounded Knee and Bigg Taj’s Live at the Bongo Club is every bit as barking as it sounds.

All told, then, well worth pouring yourself a drink and staying up an extra hour for. 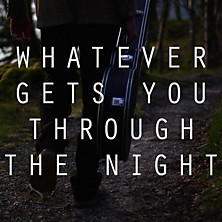