Two-decades 'overdue' it might be, but this is an astounding return.

With their second album, 1991’s Loveless, a beautiful but fading memory, the suggestion that My Bloody Valentine would release another LP has long been an ongoing joke.

So when frontman Kevin Shields, on stage in London in late January 2013, hinted that this mythical third set may be released within “two or three days”, the reaction was to laugh. Great gag. The guy should be in stand-up.

At first, this is sound from the very edge of what is considered music – but m b v isn’t just an exercise in layering noises and effects. Shields’ ability (and desire) to make each tune memorable takes precedence over the temptation to destroy audience ears.

she found now sounds as though everything is warming up again, the familiar wall of distortion building away beneath a glow of disorientation. It’s a welcome reminder that this really is MBV, and not some terrible copyists.

The lack of a dramatic shift in direction is comforting. Yet as m b v proceeds it’s clear that the band hasn’t spent 22 years standing still.

is this and yes does with electronics what the band has long done with guitars, its baby elephant drums reminiscent of Loveless’ Loomer, pounding beneath gliding sheens and Bilinda Butcher’s cooing.

if i am undulates with wah effects, its guitars sounding like underwater trumpets. new you brings Debbie Googe’s bass to the forefront, conveying an almost funky swagger.

in another way sees what sounds like bagpipes careen over a punishing rumble and crackling guitar furnace. It’s the nearest this album comes to the propulsive push and release of Soon. wonder 2 is a whirr of spectral phasing and filters.

Throughout, a thought pervades: if you ever considered MBV more of a racket than not, this definitely isn’t an album for you. But has it been worth the wait for fans?

Yes. Strip away the two-decade ‘delay’ and it’s a perfect follow-up to Loveless. It’s an album that 22 years of speculation and analysis haven’t come close to matching the reality of.

It sounds amazing, and represents an astounding return. 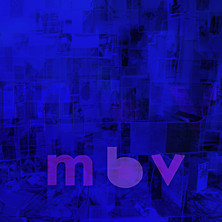