The Who My Generation Review

...it still sounds like one of the most vital and important reasons to love rock 'n'...

Saved! After years and YEARS of legal wrangling and bad blood the first professional recordings made by a spotty bunch of Shepherds Bush mods, originally called the High Numbers, get the release they deserve. Producer Shel Talmy, in the extensive sleeve notes, still sounds as thrilled to be talking about this legendary debut as he must have been the first time he walked into that church hall to watch the newly re-christened Who rehearse in 1965. At last those Talmy masters see the light of day and a vital piece of rock's jigsaw has been restored: in meatier, beatier, bigger and yes, bouncier digital stereo.

With an entire extra disc of A-sides, instrumental/A Capella versions, EP tracks, B-sides and mono mixes you get the entire picture of a cocky and (in the songwriter's case) irascible bunch of young turks determined to be the centre of attention. What made this identikit R'n'B combo more interesting than most was the fact that the aforementioned scribe had a compellingly maudlin and detached view of the mechanised mating game played by his peer group.

Songs like ''The Kids Are Alright'' - with its defeated realisation that the author can't, or won't keep up with the peer pressure, even if it means losing the girl, push Daltrey's already mature vocals to new levels of expression. ''A Legal Matter'' refuses to get tied down in domesticity; it's just too damn young. ''I Can't Explain'''s just got all confused about those funny feelings it's having, especially when it's around girls. Even ''My Generation'' with its still unbelievably irresistible explosion out of your speakers has its braggadocio undermined by the singer's stuttered delivery. LikeLennon, Ray Davies and later, Syd Barrett, being an integral part of the 60s also meant being able to see through the gloss of swingin' London.

But enough about Townshend and Daltrey: what of the other half? Sadly the departed portion of the group was more than equal to the task of taking the lead. How many classic singles can you name with a bass solo taking the place of the guitar? Entwistle the Ox's bass is indeed bovine in its presence and strength while Moon's drums remain hyperactive but drop-dead precise at all times (listen to his time-keeping on the instrumental version of the title track). It only makes you miss them more. The covers draw on Daltrey's good taste by sticking close to the James Brown/West London R'n'B scene axis. ''Please, Please'' is especially convincing though ''Shout And Shimmy'' with its hilarious mock 'shindig' crowd (Townshend hopelessly heckling with ''yeah man, gimme some more'') makes Lulu look hard.

Thousands of words have been expended over the years on why this has to rate as one of the best debut albums of all time. Some go even further by declaring it to be the ONE. To someone who joined the ride a decade too late to hear it the first time round, it still sounds like one of the most vital and important reasons to love rock 'n' roll. Intelligent but naïve, flawed and yet perfect - they're still talkin' 'bout your generation. Time to listen again... 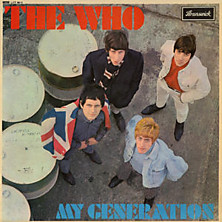