Originally released in her home country of South Africa in 2004, this album has become something of a phenomenom, winning this young artist's debut album awards as both Best Newcomer and Best Jazz Vocal album at the SAMA's (a SA equivalent of The Brits). Her first major gig was sharing the stage with the great Angelique Kidjo and she has inevitably been likened to the more gospel/blues -influenced South African singers such as Miriam Makeba and Dorothy Masuka, so she must have pretty broad shoulders to carry all the expectation heaped upon her.

The good news is that with Zandisile she really does carry it off. Confident, slinky, mixing the nu-soul of Eryka Badu or Jill Scott (''Vukani'') with the classic gospel/jazz phrasing of Miriam Makeba (''Zandisile'', ''Ndiredi''), this is a delightful album. By turns uplifting and complex or sparse and contempletive this is certainly one of the most accessible and contemporary sounding releases to come from South Africa in recent years. Never falling for the obvious approach of trying to mimic precisely what western producers are doing but nonetheless drawing on them for inspiration this is a genuinely enjoyable, even admirable debut album.

The jazzy electronica stylings of ''Troubled Soldier'', for example, provide an incessant, skittering background to an English lyric which show an intelligent, asprirational mind that is speaking about the search for racial self-confidence and freedom (of the mind), especially for women. Both ''Vela'' and the glorious ''Chula Ukunyathela'' show incredible confidence and a wonderful tonal control where Simphiwe can sing unaccompanied with complete freedom and sense of rhythm yet still bask in the glory of a full-on choir.

Simphiwe seems to have become a voice for the women of South Africa and a pop star at the same time - quite a trick - and on the evidence here, she is more than capable on building on this to become on of the greats of contemporary music. Her live show has is, by all accounts, joyful and exciting and she will be playing in London at the ICA as part of the African Music Festival on May 28th. The album and the gig are heartily recommended. Modern African Soul, indeed. 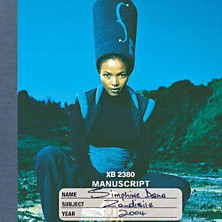