A fascinating addition to the clumsy, clattering canon of 80s electronica.

Propaganda added spice and fascination to the ZTT roster. Alongside house orchestra Art of Noise and its chart conquering boy band, Frankie Goes to Hollywood, this German confection added a pitch-black seductiveness to Trevor Horn and Paul Morley's label.

Their debut album, A Secret Wish, appeared just after ZTT had crested commercially in July 1985, and remains a fascinating addition to the clumsy, clattering canon of 80s electronica. Powered by the vocal mystery of Claudia Brücken, the sweetness of Susanne Freytag and the engine room of Michael Mertens and Ralf Dörper, the group was able to sate the European fantasies of the label. Here, it had its Kraftwerk, its Boney M. and its ABBA.

Employing about every Weimar Republic and Wagnerian reference in the book, ZTT created something as grand and illusory as anything they had put together. The concept was so high, the music they assembled could have been almost incidental were it not so inventive, and at times brilliant.

The seductive, lumbering groove of Dream Within a Dream is the real story here, however. It is, in many respects, where the album begins and ends; although largely created on a Fairlight computer, it sounds like the ensemble playing on some satanic ghost train. It is the middle track of Trevor Horn's sacred triumvirate of the 80s, alongside Frankie Goes to Hollywood's Welcome to the Pleasure Dome and the Pet Shop Boys' Left to My Own Devices. If you listen very carefully, that is the sound of the kitchen sink you can hear rattling away in the background. "Oh god, can I not grasp it with a tighter clasp," Brücken proclaims as the track builds and builds.

The rest of the album basks in the halo effect of its opener. Duel, their greatest hit, the track which gained them the oft-repeated epithet of being “Abba from hell”, chugs along full of pop frisson and fizz. First single, Dr, Mabuse, is another of this album’s highlights.

Here, sumptuously packaged with a plethora of bonuses, A Secret Wish is still not quite as good as it thinks it is. But it’s still brilliant and inventive enough to put most of its peers in the shade. 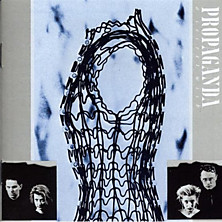