Often more psychedelic than their contemporaries, Mudhoney re-emerge at the right time...

Mudhoney practically invented grunge when they formed in 1988, signing to and then defining the Sub Pop label. Since then they have ambled through the transatlantic rock scene with mixed reviews for the past fourteen (yes, that long!) years. Since We've Become Translucent is their eighth studio album and their first in four years since their last 1998 offering Tomorrow Hit Today.

The album is characterised by the departure of bass player Matt Luckin who left in 1999 after ten years with the band and the arrival of ex-Lubricated Goat, Guy Maddison. His introduction and fluid bass style marks a watershed in Mudhoney's history and a spirited change in direction.

Often more psychedelic than their contemporary grunge counterparts, Mudhoney re-emerge at the right time given the garage revival of the moment. Nevertheless they retain a more melodic, less raw experimental sound. They offer a logical, listenable alternative to the lo-fi norm. It's an expansive, polished album recorded three songs at a time in three different studio locations with three different engineers. This gives the album a sonic variety and the band the opportunity to diversify, yet retains singer Mark Arms trademark strong, rasping vocals, rendering each song unique.

The energetic "Inside Job" is the anomaly having been recorded with Jack Endino in 2000 with MC5's Wayne Kramer on bass pre-Maddison. The outstanding tortured vocal of the swirling rock classic "In the Winners Circle" has it's roots somewhere back in the late sixties or early seventies, while "Where the Flavour Is" features a horn section. The imposing, discordant "Crooked and Wide" precedes the stunning first single "Sonic Infusion"; a Zeppelin-esque epic outburst lasting nearly eight minutes.

An impressive return to form invigorated by new blood in the form of Maddison and engineers from Egg, Gravelvoice, Jupiter and Private Radio, that should be received as one of Mudhoneys finest. The lyric from the prophetically titled "Our Time Is Now" rings true for the transmuted, redefined Mudhoney: 'Given two lousy choices, we chose neither'. Go your own way. 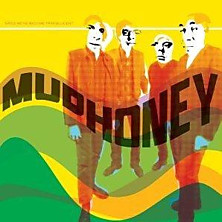