When confronted with music as splendid as this, it’s easy to be swept along on a wave of purple prose. “Beautiful”, “haunting”, and “beguiling” are all words that spring easily to mind whilst listening to this astonishing record.

Yet such is the presence and emotional weight created by the voices of Rachel and Becky Unthank, even such effusive descriptions drastically undersell what this remarkable duo achieve via a distinctive brace of (mostly) traditional folk tunes.

Alongside the extraordinary potency of their singing, the nuances and embellishments of the instrumental settings - created by an expanded team that includes strings and horns (as well as regular collaborators Niopha Keegan and producer Adrian McNally) - are decisive and striking.

The spellbinding eight-minute-long Annachie Gordon is a well-known tale of doomed lovers undone by the local gentry. Yet in a remake that owes more to Music for Airports than Cecil Sharp House, it is made viscerally fresh as the heartache seeps slowly across a repeatedly tolling, echo-drenched piano chord.

Their cross-pollination of old and new avoids coming over as novel or awkward, and it’s exactly this inventive approach which has always given The Unthanks their edge.

The sharp slicing strings and the brass undertow on Lucky Gilchrist reimagines Michael Nyman’s staccato-driven scores whilst the arrangement of Lal Waterson’s At First She Starts channels the ornate melancholia of Nick Drake’s Way To Blue with a stately splash of Henry Purcell.

Whilst a smile is raised by the inclusion of knockabout tunes such as the Geordie dialect ditties of Betsy Bell and Where’ve Yer Bin Dick, it’s the profound intensity of bleaker material such as the truly heartbreaking dignity of The Testimony of Patience Kershaw or Ewan MacColl’s Nobody Knew She Was There that stays with the listener longer.

As good as their 2007 Mercury Prize-nominated album, The Bairns, undoubtedly was, Here’s the Tender Coming raises the standard higher still. 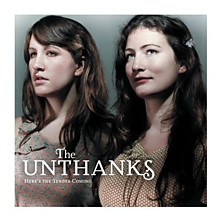