Shipp proves himself to be a true original across two excellent discs.

Once dismissed as a Cecil Taylor imitator because of his jagged, percussive attack, pianist Matthew Shipp has gone on to distinguish himself as a true original, incorporating not only the history of jazz piano but also the hypnotic repetition of minimalism. He is an "idea man", but not merely a musical intellectual – his music offers challenges aplenty while demonstrating wit and passion.

This double disc of live recordings features a trio date at The Arts Center of the Capital Region in Troy, NY and a program of solo piano recital at Le Poisson Rouge in New York City. On disc one, Shipp is joined by Whit Dickey on drums and bassist Michael Bisio, who is given generous solo space on several tracks. The New Fact begins with a rumbling modal vamp reminiscent of McCoy Tyner, which develops into a nice display of improvisational virtuosity, synthesizing the harmonic language of Tyner and Taylor, as well as Herbie Hancock. The fleet-fingered and pitch-perfect Bisio ends the piece with an absolutely jaw-dropping solo.

Circular Temple, the longest piece in the program, starts with some pensive musing from Shipp and a nice bit of arco bass from Bisio. Eventually, Shipp fastens onto another hypnotic vamp and accelerates into an impressive extended solo which demonstrates total mastery of his instrument. This piece slides right into the one standard here, Billy Strayhorn’s Take the A Train – in Shipp’s hands, a crashing, percussive tour de force. Once again, the pianist does not adopt the standard practice of abandoning the melody after 30 seconds or so – instead, he dissects, examines and reconstructs the melody to excellent effect.

The six solo piano tracks on the second disc also run into each other without pause, forming a single extended improvisation which allows Shipp to carry patterns and dynamics from one piece to the next. An amusing deconstruction and reconstruction of the old lounge-jazz chestnut Fly Me to the Moon is the only non-original, which offers further illustration of Shipp’s improvisational magic. Not surprisingly, this is a more demanding program than that of the trio disc, and although Shipp is not adverse to the occasional rhythmic groove, the solo music is often closer to modern classical than to jazz. Not that this is a bad thing, but be warned: you’re not going to hear many standard blues changes or easily assimilated Broadway show tunes here. 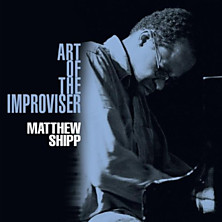