Kathryn Williams Over Fly Over Review

It feels over-produced and undercooked, slipping through one ear and falling out the...

If it's bittersweet tales of modern life and soundtracks to heartbreaks and love shakes you are after, then Kathryn Williams has long been a name to look to. Ever since she got a nomination for the Mercury Music Prize for the sublimely subtle Little Black Numbers, she's been strumming out Sunday morning soothers and late night meanderings that have delighted at every turn.

Unfortunately though, that enjoyment ended with the humdrum covers album Relations, which saw her failing to stamp her mark on such greats as Lou Reed's ''Candy Says'' and Neil Young's ''Birds'', all recorded as tribute to the artists that inspired her. The album, recorded in-between the writing and recording of Over Fly Over, also seems to have robbed her of her edge.

It was meant to be the spike to spur Williams back to the top of her game. She admitted to hitting a personal slump before its recording, but unfortunately there are no signs of it ending. She has never been an acerbic or aggressive writer, but there was often a twist, a turned screw to her lyrics that revealed a universal truth on the back of a beguiling guitar.

Unfortunately, Over Fly Over feels blanched. It feels over-produced and undercooked, slipping through one ear and falling out the other with little snagging on the way through. While her voice is still as silky as ever, it meanders without purpose, never grabbing and twirling the way that it has previously.

Over Fly Over is, in a word, disappointing. In its ordinariness, Williams has pushed herself back behind the liveliness of her contemporaries (the likes of Eddi Reader and Kate Rusby) and further towards the mediocrity of the dreadful Katie Melua. It's time to go back to that record collection and find some better inspiration. 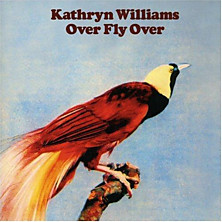