With his swooning looks and unparalleled ability to dance and preen, Terence Trent D’Arby’s pop-soul channelled most reference points of 20th century R&B with a surfeit of swaggering self-belief. With this debut album he was everywhere. As Q Magazine wrote, D’Arby displayed "an extraordinary gift for soul ventriloquism and a frisky tendency to do the splits". This combination, married with well-written pop songs, garnered him tremendous critical and commercial success.

D’Arby appeared mysteriously, and fully formed. A US citizen, he had a gospel upbringing, was a trained boxer and had a spell in the US army. After going AWOL in Germany he sang with the group The Touch, before settling in the UK.

Produced (bar two tracks) by Heaven 17’s Martyn Ware, Introducing the Hardline… is ambitious and accomplished, its crisp and clean sound a triumph of synthetics and soul. The Howard Grey-produced If You Let Me Stay was D’Arby’s calling card, an impassioned pop rush with his keening, pleading vocal. And then, the hits kept tumbling out. There was the Prince-meets-James Brown of Dance Little Sister and the skewiff soul of Wishing Well – the latter topped the Billboard Hot 100 stateside. Sign Your Name, his biggest UK hit peaking at number two, was a growling, sensuous ballad wrapped in the sweetest of melodies. Away from the hits, Let’s Go Forward is a remarkably intimate performance.

D’Arby said at the time that he wanted his work to "leave a taste in your mouth that’s as wholesome as your mum’s best apple pie," and it clearly did, winning the singer a Grammy for Best Male R&B Vocal Performance and a BRIT Award for Best International Breakthrough Act. The album didn’t need a publicity machine: D’Arby took care of that all himself, proclaiming it "the most brilliant debut album from any artist this decade". And although not the case (insert your own favourites here), it certainly came close to perfection.

The complexity of D’Arby’s 1989 second album Neither Fish Nor Flesh derailed his commercial juggernaut, crystallising Introducing the Hardline… as his moment, a soundtrack to the turning point when the 80s turned from austerity to prosperity. It’s as central to that decade as the much-seen image of the city trader waving his wad of banknotes to the camera. It remains one big, infectiously glorious record. 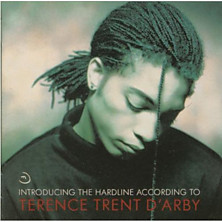