The sound of a love affair being resumed

The return to the stage in 2008 of Leonard Cohen, at the age of 73, needed some kind of record. It still seems remarkable that a man of his age and with such a (misplaced) reputation for unremitting misery should have been greeted so warmly by crowds in the cavernous O2 arena. But that's Lenny's gift. He's not only accompanied more than one generation's journey through the twisting labyrinths of the heart, he's lead the way and still looks and sounds like the thinking man's Godfather of the boudoir, pictured on the sleeve, dapper in trilby and looking cool as hell. On this live double CD, within seconds of humbly accepting the crowd's enormous roar of approval, he's made the huge amphitheatre as intimate as a hotel room or tiny Italian restaurant.

The backing singers sometimes get a little too cloying, the saxophone solos err on the side of cheesy MOR, but ultimately all you're listening to is that gravel-edged voice, opening you up like a book and reading from your soul. Cherry picking just about everything a seasoned fan would wish to hear, from Suzanne and Bird On A Wire to the under rated I'm Your Man, Cohen gives us exactly what we want. It's a sentimental journey with teeth still intact.

The bleak humour that so many have refused to acknowledge over the decades is also in ample supply here. On the introduction to Ain't No Cure For Love, he tells of how 14 or 15 years earlier he was in London as a 60-year old, ''just a kid with a crazy dream'', before he lists all the anti-depressants he's tried in the intervening years.

Basically this is the sound of a love affair being resumed: Leonard's love for those who appreciate his gift for recounting love's pitfalls and joys, and the love of thousands of grown ups for a man who never sold them out and always told it straight. His rendition of Hallelujah,has a fierce defiance to it that seems to say to all the awful pop puppets who think they can appropriate it; ''back off youngsters, you'll never understand this until you've been around the block as many times as us''. And that may be world weary cynicism on Everybody Knows, but it's of the comforting, wise kind.

It's enough to make you impatient to reach your 70s. Let's hope a few of us can remain this warm, good-humoured and still in love with life when we do. 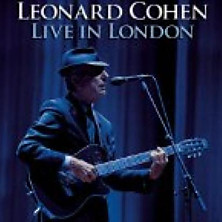