Lee asserts that for Rush it's always been about striving to be the best musicians...

Although Rush have never come remotely close to being fashionable, the trio of well mannered Canadians have been purveying their brand of cerebral rock for over 30 years. More than enough time, then, to build up the kind of massive and loyal fan base most bands would sell their granny for.

Filmed in front of 60,000 raving Brazilians on last year's world tour, Rush In Rio is the bands first live DVD. For hardcore British fans, denied the chance to catch their heroes in the flesh, it will no doubt come as manna from heaven. Sound quality is immaculate throughout, although the camera work is fairly leaden and unadventurous. Given the band's decided lack of onstage charisma, this is the disc's major drawback. However, the true fan also has the option of watching three tracks with a multi angle viewing option, which provides a nice diversion for a few minutes.

A diverting little documentary reveals them to be thoroughly likeable types - goofy guitarist Alex Lifeson is the joker in the pack, helium voiced Geddy Lee is businesslike and well mannered, while lyricist and drummer Neil Peart remains distant but polite. Lee asserts that for Rush it's always been about striving to be the best musicians they can be, and certainly their virtuosity is self-evident.

The set list veers between the contemporary and the classic, kicking off with the synth-driven ''Tom Sawyer'', a minor UK hit in 1980. For long-term fans the chance to hear ''Bytor And The Snow Dog'' live for the first time since 1978 may be reason enough to buy, although its gleeful prog lunacy may be too much for modern tastes. ''2112'', the band's dystopian concept epic, gets a brief airing, where Lee's inability to hit the high notes like he used to is apparent. Meanwhile, the more recent material from ''Vapour Trail'' sounds remarkably fresh and surprisingly heavy, showing just how much the band felt reinvigorated by their return to the studio after a five year hiatus.

What's most remarkable about this DVD, though, are the crowd shots. Rush had never played in Brazil before, and the devotion of their fans (including local heroes Sepultura) borders on the maniacal. Watching an ocean of hands clapping in unison to ''The Spirit of Radio'' is quite a spectacle. And that's not something you see everyday. 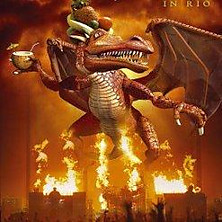