A combination of absurdity and accessibility makes this a fascinating debut.

Diagrams is primarily the work of a bespectacled bloke from Streatham called Sam Genders, formerly of Tunng. Yes, he’s one of those bedroom tinkers, locking himself away to toy with ideas, writing melodies on his guitar and then breaking them up with programmed beats. The resulting sound is a minimal delight, with nods to the fragmented, jerky rhythms of Field Music, Metronomy and Broadcast, and – through Sam’s warm vocal – Elbow.

That’s quite a list of comparisons, yet Genders holds his own among them. With the help of a few like minds, including Micachu and Fever Ray’s co-producer Subliminal Kid, he has burst out of his bedroom and crafted a debut album that sounds like much more than the work of just one man. Indeed, to embody Black Light live on stage, Diagrams has to become a nine-piece band.

This is an album that wraps reassuring arms around you: while Genders enjoys experimenting with form, he also likes a delicate pop melody, making the pill incredibly easy to swallow. Over the bedrock of unpredictable, toe-tapping rhythms, Genders’ voice plots a steady course, often lingering on single, repeated lines: in the outro to Appetite, for example, he sings "no time like this time, no time" 11-and-a-half times in a row, but gets away with it because the sweeping orchestration is so lush that it’s like being lulled into a wonderful dream.

Elsewhere, it’s impossible not to be reminded of Kings of Convenience as Tall Buildings skips along, while the ballad Peninsula marks the point when Genders sounds most like Guy Garvey as he picks out a pretty pattern on his acoustic guitar. And he’s as playful with his lyrics as with his music: while opener Ghost Lit paints an image of baking bread in the morning and drinking hot tea, Night All Night is altogether more warped, inviting you to "Fly silent to the icy mountain / Make circles with the lions there". If the music wasn’t so easy on the ear, you’d worry about his mental health or drug consumption.

This combination of absurdity and accessibility makes Black Light a fascinating debut, and it marks Genders out as a solo talent to keep tabs on. 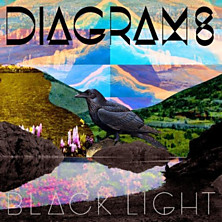