Q:What do you call someone who hangs round with musicians ? A: a drummer.

Its an old joke, but old prejudice still runs deep against those who keep time at the back. Even in the sleevenotes to this live double from Bill Bruford's Earthworks, guitarist and Bruford collaborator Ralph Towner says "Bill's more than a drummer; he's more of a musician who's a drummer". Oh well.

Whatever, with prog rockers Yes and particularly in the mid 70s improv metal incarnation of King Crimson, Bill showed himself to be a fantastically inventive, responsive and technically gifted player, with a sound and style that was instantly recognisable and owed maybe more to Tony Williams than Keith Moon.

Still, back to Earthworks; since its inception in 1986 Bruford's band has evolved from a quirky electronic/acoustic fusion outfit (home to Django Bates and Iain Ballamy) to a hard blowing all acoustic quartet. Footloose and Fancy Free showcases material drawn mainly from the last two Earthworks records; these are mostly intricate, time signature bending themes peppered with summery chord sequences and sharp, impressive soloing. Bruford's writing is full of sharp turns and dynamic shifts characteristic of much US fusion, but the lack of electronics lends the music an airy, expansive feel.

Having said that, Patrick Clahar's tenor has the diamond hard, studio burnished tone of an LA fusioneer (think Tom Scott, David Mann). Like Michael Brecker, he's absorbed a lot of Coltrane but his harmonic language draws as much from funk and soul as much as jazz. While his soloing on the uptempo tunes occasionally falls victim to a desire to cram every inch of space, his work on soprano reveals a more considered improviser, as on "The Wooden Man Sings, and the Stone Woman Dances".

Pianist Steve Hamilton alternates McCoy Tyner-esque cascades with sumptuously lyrical episodes worthy of Hancock or Jarrett; occasionally he opens up the piano lid to generate clicking, guitar like figures (as on the title track) or harp like swirls; throughout he sticks to Bruford like glue, as does bassist Mark Hodgson.

The leader's on fine form; one can imagine the drummers in the audience jostling to get a view of his paradiddle technique. Throughout he's always doing something worth listening to (but without grandstanding) and his solos erupt ecstatically over repeated piano and bass riffs; there's very little in Bruford's playing that comes from American jazz (except maybe a spot of Max Roach).

Predictably, Bill's handling of odd meters is seamless and unforced; his 11/8 swings as hard as his 4/4, while the juicy funk of "Original Sin" showcases the leader's generation of advanced propulsion capability. Over a double CD the compositional intricacies can degenerate into fussiness; the ears long for a little space, a little stretching out. A little at a time though, and youve got an album of intelligent acoustic fusion, finely played. Give the drummer some... 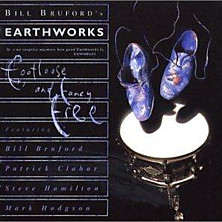