The Knife Shaking the Habitual Review

The Swedes’ fourth LP is something else, but something profoundly exhilarating.

Somewhere around the eighth minute of Full of Fire – a pounding electronic monstrosity that sounds like a techno version of a panic attack and is nothing like the longest song on The Knife’s fourth album – singer Karin Dreijer Andersson’s breaks into an interpolation of Salt-N-Pepa’s 1991 pop smash Let’s Talk About Sex.

“Let’s talk about gender, baby / Let’s talk about you and me,” roars her heavily pitch-shifted voice. It is terrifying. It is funny. It is quite, quite mad, and as representative a moment as any on the wildly daunting follow-up to the Swedish sibling duo’s peerless 2006 electro-pop masterpiece Silent Shout.

In fact, to even begin to get one’s head around the extent to which the band that crafted modern standard Heartbeats has now hurled aside all pop sensibility, it’s probably instructive to listen to 2010’s underrated Tomorrow, In a Year, The Knife and friends’ soundtrack to an avant-garde Danish opera about Charles Darwin.

Filled with long, hook-free movements, lyrically preoccupied with evolution, and emphatically crafted as art over entertainment, there are a great number of similarities between it and Shaking the Habitual.

The difference, though, is that where Tomorrow, In a Year was a focussed record that used a quiet, cerebral palette of sound to evoke the immensity of prehistory, Shaking the Habitual is a thunderously loud and vivid record that screams and detonates with the full force of the present, all cacophonous electronic textures and shrieking meditations on the state of humanity.

There are allusions to environmental crisis, to gender crisis, to Margaret Atwood’s blackly comic genetic engineering novel Oryx and Crake. There is a devastatingly uncomfortable 19-minute track called Old Dreams Waiting to Be Realized.

Records do not come more provocative, abrasive or uncompromising than Shaking the Habitual. Does that make it good? It’s so unapologetically indigestible that it’s hard to say at this stage: Silent Shout is clearly superior as a pop record and Tomorrow, In a Year is much more satisfyingly fathomable as a piece of art.

Shaking the Habitual is something else, but it’s hard not to find that profoundly exhilarating. 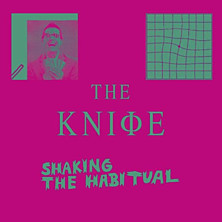