Those arriving at Doorway – the opening track of W, Planningtorock’s second album – with no prior knowledge of its architect might be rather shocked to discover that the growled, baroque malevolence on display actually comes courtesy of a woman who spent her youth growing up in Bolton. Janine Rostron seems to revel in such confusion, playing with roles of identity in a provocative fashion, defying notions of conventional sexuality to such a degree that one song is entitled I Am Your Man. Even the video for Doorway features her with a mask that succeeds in making her look like Mr Spock’s glamorous sister.

But though it’s frequently disconcerting, W is also thoroughly engrossing, creating an alternative musical universe in much the same way as The Knife, the Swedish act with whom she collaborated on 2010’s opera Tomorrow, In a Year. Evidently at home in the studio, Rostron imagines a darkly melodramatic world of shadows and sleek metallic edges, her electronic setting industrial and semi-gothic in a similar fashion to current critical faves EMA and Zola Jesus. Unlike them, however, Rostron refuses to ham it up, using technology to stretch her voice into unrecognisable shapes that hold an audience at a distance and render her almost robotic, as much a part of the artificial environment as the machines she employs.

So when her slowed-down vocal on The Breaks delivers lines like "Don’t be surprised, I’m ripping out my eyes… We break too easily", it’s the replicants of Blade Runner that come to mind. This is underlined by arrangements that recall the lush orchestration of Vangelis’ soundtrack to Ridley Scott’s legendary film, with pizzicato strings and saxophone nestled amidst the brooding soundscapes of Going Wrong and Milky Blau, and Black Thumber conjuring up images of epic stargazing.

There’s plenty of other unsettling trickery going on: Jam is a woozy experiment in key-shifting synths, metallic percussion and nightmarish vocals, Janine a minimalist cover of an old Arthur Russell tune rendered with little more than a rumbling bass synth and another decelerated vocal take. But Living It Out is a playful pop tune in debt to Giorgio Moroder, while Manifesto could be a 21st century take on Bow Wow Wow. James Murphy’s (of LCD Soundsystem) decision to sign this shape-shifting creature to DFA Records makes perfect sense given her blend of art, electronics and mischievous humour, and while it’s an undeniably alien world Rostron inhabits, it’s an altogether convincing one. 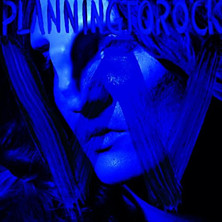