The Strokes Room On Fire Review

Different enough to sound new and exciting but similar enough to their previous work...

It's been two long years but the new Strokes album has finally arrived. But does Room On Fire deserve the hype? Will it match or even surpass their debut, which got people talking everywhere from the coffee shops of the Lower East Side to the Ten Bells in Mile End. Anything that comes close will be fantastic. Anything that sounds as exciting, as ground breaking or as fresh as Is This It will be great.

Julian Casablancas' vocals announce their return in the first couple of bars of "Whatever Happened". Then the guitar kicks in and we know we're in familiar territory. That much imitated, but never bettered, cool Strokes sound! It's like reacquainting yourself with one of your oldest friends who looks great for their age!

"Reptilia" sounds like several songs on Is This It but only more so. The bass is deeper, the guitars more high pitched and the solos more extravagant. Even the drumming is more accomplished and the vocals more rasping. That Wasn't It. There was more. And it sounds great.

"12:51", the single, is as familiar to us now as "New York City Cops" or "Last Nite". And as good. Wonderfully retro and yet wonderfully modern at the same time.

The Strokes experiment with new directions in "Automatic Stop", "You Talk Too Much" and "Under Control". The last of these is my favourite; it's different enough to sound new and exciting but similar enough to their previous work to retain that classic Strokes sound. They've broken it down and slowed it up. Fantastic.

The band get to rock out on "The End Has No End" which reminds me of "The Modern Age" from their previous record. Casablancas' fuzzed out vocal ("Two steps forwards, two steps back") strains to be heard over the guitars and bass.

Throughout the vocals are difficult to hear, let alone decipher. The thrill of new relationships and pain of bitter break ups appear to be the main themes here: 'I never needed anybody' ("Between Love & Hate"). 'It's not your fault, that's the way it is, I'm sick of you' ("The Way It Is").

OK, I was demanding the impossible when I asked to be as excited by this record as much as I was by Is This It. Bands should think themselves lucky to achieve such heights just once in their careers. However, they've done all they could have done. They've made Is This It part two. It's more of the same plus extras. And I'm more than happy to settle for that. 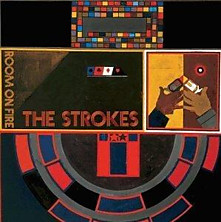