Noir shouldn’t get too down on himself, for he may just be a genius.

Manchester’s Alan Roberts is a king of deception. The stage name suggests a dark persona, but, if Jim Noir is an alter ego, he seems suspiciously similar to a 60s-obsessed one-man band making his music in various rundown bits of Manchester.

Noir’s best-known song, the 2005 single My Patch, sounded like the jauntiest music-hall sing-along this side of a northern Chas ‘n’ Dave, but its hook-line was a threat: “If you ever step on my patch / I’ll bring you down.” And Jimmy’s Show, Noir’s third album, could be a 13-track trip down The Beatles’ Penny Lane, blending the various song styles of Paul McCartney, Ray Davies, Brian Wilson and Gruff Rhys into a cute lo-fi celebration of a northern town on a sunny day; all trees, fishes, trips out to the country and cups of tea.

But beneath Noir’s almost offhand genius with melody and Beach Boys harmonies, misery and alienation lurks. The Tired Hairy Man With Parts is a song about being too unhappy to get out of bed. Tea is really about being too scared of the local muggers and thugs to brave a trip to the off-licence. And Driving My Escort Cosworth to the Cake Circus is a paean to his own irresponsibility with motors: “I’m a stereotypical public nuisance,” he trills, all rock rebellion replaced by resigned shame.

But Noir shouldn’t get too down on himself, for he may just be a genius. The likes of the aforementioned Driving My Escort… and Tea join the Sgt Pepper’s-ish opener X Marks the Spot, Sunny, The Cheese of Jim’s Command and Timepiece in illuminating a set which is what The Beta Band promised but couldn’t deliver. It’s an album of perfect modern psychedelia, pristine in content but ramshackle in style, as at home with synths and drum machines as it is with acoustic guitars and martial Ringo drums, and packed full of sadness and dread and love for a ghostly choirboy harmony.

Jimmy’s Show tells you a sorry tale of woe, but then shrugs, and grins, and gives you a hug and a cup of tea laced with magic mushrooms. 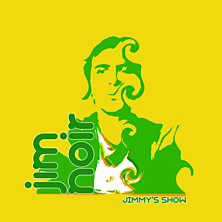