One of the most inventive and transgressive albums you’ll encounter this year.

Although its sonic palette incorporates more synth-sourced electronica than previously heard, this second album from Leeds-based three-piece trioVD possesses the same abrasive and uncompromising attitude that dominated their startling 2009 debut, Fill It Up With Ghosts.

Like its predecessor, almost every second bubbles over with a sound that’s either intriguing or downright baffling. And with its hurtling, remorselessly breakneck pace this isn’t an album you listen to as such; rather, you grapple with it.

Fashioned from the mangled debris from a high-speed and head-on collision between rock and jazz, Maze is ingeniously fashioned. It’s an exotic hybrid vehicle fearlessly veering into strange and unfamiliar neighbourhoods at a velocity that’s not for the faint-hearted.

Drummer Chris Bussey’s presence is vital to this set’s success. His scuttling beats and syncopated swipes at the barrage of rabid snarls and howls emanating Chris Sharkey and Christophe de Bézenac (guitar and sax, respectfully) are a compelling constituent of trioVD’s gloriously off-kilter enterprise.

Although there’s constant arsenal of notes exploding in all kinds of directions, there’s no apparent interest in conventional soloing. Instead the focus is on intense, witty arrangements, dashed off with a savage bravado that appears to make light of their underlying complexity and knotted textures.

This is typified by tracks such as then insistent buzz of Interrupting or DBST, whose mood is both joyous and belligerent. Engaging but volatile, these two often-contradictory states perfectly summarise one of the most inventive and transgressive albums you’ll encounter this year. 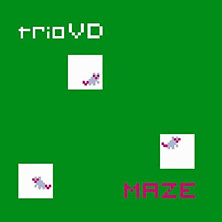