A nearly perfect creative synthesis between tradition and innovation.

Since their first gig in New York City in May 2005, this 18-piece band has been the talk of the city. They regularly attract acclaim for their live work from critics and fans alike. Now their studio-recorded debut album Infernal Machines ably demonstrates what all the fuss has been about.

Secret Society’s founder, composer and conductor Canadian-born Darcy James Argue, describes them as a “steampunk big band”. Steampunk is a literary form that fantasises about modern technology existing in the steam-powered age. Argue uses the term to emphasise his band’s updating of old-fashioned big-band methods.

The band’s instrumentation includes electric guitar, bass guitar and Fender Rhodes. It also uses such modern techniques as reverb and looping. Argue poses the question, “What if you had this contemporary big band that had a shared sonic vocabulary with bands like Tortoise or TV on the Radio?”

Argue is aware of the potential pitfalls of this approach. The title Infernal Machines refers to a 1906 quote from composer John Philip Sousa which warned of the dangers of music technology. Heeding the warning, Secret Society achieves a nearly perfect creative synthesis between tradition and innovation, without obvious tensions.

The band displays many of the attractions of steam-age big-bands: tight ensemble playing, memorable themes, imaginative arrangements, and fine soloists. Argue has learned from the best. A protégé of Bob Brookmeyer, he admires the big bands of Ellington, Mingus, Gil Evans, Kenny Wheeler, Maria Schneider, Mel Lewis and Carla Bley.

Soloists of the calibre of Ingrid Jensen on trumpet, James Hirshfield on trombone or Mark Small on saxophone are used sparingly. It never feels as if there is a queue of soloists awaiting their turn. Instead, adequate time is devoted to ensemble passages that are rich in detail and texture.

Darcy James Argue has created a big band for the twenty-first century that builds on the strengths of the past while using the genre to produce dynamic contemporary music. 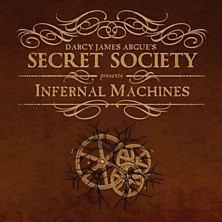