If it weren't for the lower string, the added depth and darkness, you'd be hard pushed...

Slowly but surely, Maxim Vengerov is working his way through some of the 20th century's greatest violin concertos, and it's no coincidence that his friend and musical mentor Mstislav Rostropovich is on hand to conduct. Slava knew Prokofiev and Shostakovich, and had music written for him by the two Brits whose concertos appear on this new CD: Britten and Walton. It was Rostropovich who suggested the Britten to Vengerov, otherwise he might not have played it, which would have been a pity, as he says he now recognises it as one of the greatest musical creations of the 20th century, an underrated treasure.

There's nothing odd about Russian musicians adopting Britten; remember the composer's friendship with and respect for Shostakovich, and remember also that when Britten himself came to record the Violin Concerto, his soloist-of-choice was a Russian, Mark Lubotsky.

Fine though that 1970 Decca recording is, it is well-and-truly eclipsed by this newcomer. Vengerov's love for the piece flows from every pore, and his stellar technique allows him more freedom to explore the musical and emotional implications of the score. Vengerov knows that the Violin Concerto is in part a memorial to those who gave their lives fighting Franco in the Spanish Civil War (which ended in defeat for the democrats while Britten worked on it), yet he finds room for joyful exuberance in the scherzo...which only heightens the pathos of the finale. I've never felt such an epic sense of grief and tragedy in the Britten as in the final pages of this performance, with Vengerov's passionate phrasing and eloquent vibrato, and Rostropovich's emotional moulding of the orchestral textures. The recording is the business as well: firm, fat and full-range.

You're allowed barely ten seconds to recover, before the melancholy opening of Waltons Viola Concerto. Yes, Maxim's borrowed a bigger Strad, the Archinto viola, and he's obviously taken to it like...well, like a viola-player. If it weren't for the lower string, the added depth and darkness, you'd be hard pushed to recognise that this wasn't Vengerov on his regular instrument; intonation is flawless, and there's that same commanding presence and complete control. Speeds though are unusually slow in the outer movements, with Vengerov and Rostropovich taking all the time they need to allow us to register the full emotional width of work. When it comes to the high-flying lines, working well up the fingerboard, Vengerov has few rivals for the sheer beauty of sound he produces maybe only Yuri Bashmet does better (and then only briefly, and only just).

Purists might be upset by the slow speeds in the Viola Concerto, but they should hear this CD regardless: two of the greatest twentieth century concertos by Brits brought thrillingly to live by a pair of Russians. Come on, Maxim: what would be so wrong with giving us the Walton Violin Concerto as well...? 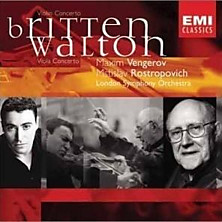