Cock a cursory ear to this melange of mambo muzak, Latin, swing and jazz and you could be listening to a lounge band on the Catskills circuit – mainmen Walter Becker and Donald Fagen were briefly in pop harmony group Jay & the Americans and even penned a song for Barbra Streisand. But beneath the charming melodies and sublime grooves are lyrics every bit as acrid if oblique as, well, Dylan’s, while the music packs a gorgeous, subtle punch.

It became clearer as time went on, but even at this early stage you can tell that Steely Dan, the titans of 70s studio pop along with 10cc, were less a band and more a pair of transplanted New Yorkers – so sharp they’ve been called the Larry David and Jerry Seinfeld of pop – whose job it was to conduct their many players. They appeared to have it all worked out to the nth degree – not one percussive break or dab of flugelhorn is out of place. As with all of Steely Dan’s albums up to 1980’s Gaucho, much credit for this attention to detail must go to producer Gary Katz.

So fully-formed is Can’t Buy a Thrill that you would scarcely believe that it’s their debut. Fagen’s acerbic, nasal croon is not the only vocal here – David Palmer’s dulcet tenor can be heard for the first and last time on a Steely Dan album, taking the lead on Dirty Work and the exquisite Brooklyn (Owes the Charmer Under Me). Drummer Jim Hodder and Fagen duet on Midnight Cruiser – the very definition of bittersweet – but elsewhere Fagen dominates, and so the Steely Dan model is in place: tightly constructed songs with dazzling hooks, clever, cryptic lyrics, and vocals that offer teasing critiques for those that want them.

The singles Do It Again and Reelin' In the Years are as beautifully crafted as any AM radio staple, while Only a Fool Would Say That is quintessential Dan: mellifluous yet mordant, easy on the ear but as caustic as any dissection of the American dream. 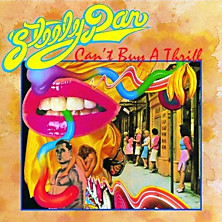