Nick Jonas and the Administration Who I Am Review

Despite a great pop voice, Jonas struggles to cross into the rock world.

When a young pop star with a huge, devoted audience attempts to make the jump from the teen present to a more grown-up future, there is often a shocking crunching of gears. There are bad approximations of older artists' work, and strained attempts to sound gruff and experienced, using a reedy voice which squeaks a lot. Little feet, lost inside big shoes.

Nick Jonas – of Disney's world-beating Jonas Brothers – is in the midst of discovering this. He has an astonishing band, featuring three former members of Prince's New Power Generation. They can play anything – sleazy rock, gritty funk, soul-inflected pop – so all Nick has to do is bring a wide selection of song ideas, and he should be home and dry. And, for the most part, he is.

But there's a problem. Nick has a great pop voice – high and clear and strong. It isn’t a great rock voice though, and his desire to smash it into shape by spirited bellowing alone can curdle things, just as they should really start cooking. The title track in particular suffers, when Nick's desire to emote like a Springsteen crosses over from raw passion into something sonically unpleasant.

But this shouldn't be taken as proof that there's nothing to the Jonas empire except huff, puff and dressing up. Nick's upper register, given a full School of Rock workout on Conspiracy Theory, turns out to be a pretty impressive instrument. And when he puts it to pleading use on the sobbing, desperate In the End, that's when he finally sounds like he means what he is singing.

It’s a shame he manages to spoil the moment by self-consciously mumbling "take it Tommy" before the Riders on the Storm keyboard solo, but that's kids for you.

Naturally it all ends with a massive gospel choir and a hot rockin' sweaty workout, and yes, more shouting. But to criticise him for trying is missing the point. This album is aimed at the wasteland between Nick's core audience and the wider rock world. The next one could even take him all the way, provided he isn’t overwhelmed by another teen phenomenon in the meantime. 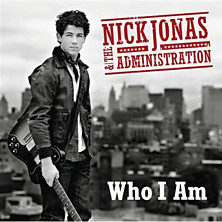