Guinea-Bissau is a tiny patch of grassland and mangrove swamps squeezed between Senegal and Guinea with few economic resources and a history of civil wars. It is a nation, however, blessed with an extraordinary cultural diversity and this rich mix translates into a musical landscape which is far more varied than its scenery.

Manecas Costa is the first Guinean artist to tap into his country's abundant musical heritage, interpret it in his very own way, and bring it to a worldwide public. Rhythms of the Mandinka, Manjak and Balanta are all subtly introduced into the "gumbe paradise" which the title of his international debut promises. The gumbe is Guinea-Bissau's trademark sound - the musical equivalent of the national flag - and its compelling beat drives a large part of the album without ever drowning the multitude of other styles which trickle softly from the guitars and drums.

Though "Paraiso di Gumbe" toys with musical traditions which are largely unknown in the West, it still sounds surprisingly familiar. With its languid, emotionally charged melodies and playful bounce it conjures up the sounds of Latin America, Africa and Southern Europe all at once, while carving its very own artistic niche. "Djunda Djunda" (Tug of War), for instance, is a gently rocking dance floor piece packed with layers of Guinean percussion which would fit snugly into the musical backdrop of London's Brazilian bars. And the smooth sensuality of ballads such as "Pertu Di Bo" inspires emotional responses without having to give away any creative roots.

The cross-continental echoes of Costa's music are particularly appealing as they are not the result of contrived fusion but are from the very roots of Guinea-Bissau's gumbe music. Created in the Caribbean over two centuries ago and brought back to Africa, where it was blended with both Portuguese and indigenous rhythms, gumbe has the world in its beat. And with his debut release Manecas Costa looks set to conquer the world riding the gumbe. 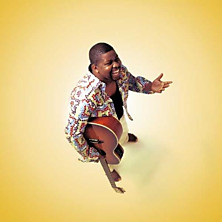