Although Abilene, Texas’s Micah P Hinson’s fourth ‘proper’ album’ – excluding 2009’s ill-advised covers release – begins with a dolorous chamber music overture and closes with a rather more optimistic instrumental waltz, …Pioneer Saboteurs is far from a string-laden coffee table country record. The seven minutes of white noise that precede its pastoral coda make that clear. They’re hardly necessary, however, given that Hinson’s spent the previous hour auditioning to replace Johnny Cash as the Man in Black.

…Pioneer Saboteurs is a grand requiem for Hinson’s America inspired by Walt Whitman’s 1900 poem Pioneers! O Pioneers. It’s defined by Hinson’s lugubrious, weather-beaten baritone, like a hoarse Lee Hazlewood calling from beyond the grave, and an unusual musical mixture that occupies a desolate ground between Calexico, Tom Waits and, perhaps, Mogwai. It’s full of sepulchral beauty, especially on its central track, The Cross That Stole This Heart Away, in which, against a bleak musical landscape much like a sedated Godspeed You! Black Emperor, Hinson wearily recalls his rescue by an alternative saviour who “gently spoke my fears and trials away”. Dear Ashley is similarly potent: while lyrically it struggles to express any more than “you set me aflame”, Eric Bachmann (Crooked Fingers)’s aching strings convey “the words I meant to say” far more eloquently than Hinson’s consciously inarticulate speech of the heart.

But such reticence is unusual, with Hinson repeatedly conjuring up often shocking images, of “ropes made for limbs”, of men “impaled on a foreigner’s fence”, of a lover “stuck on the job” while his partner hangs herself, of a preacher who would “rather cock the trigger than live another day”. Some might find all this misery, whether it’s stripped back like Sweetness or as explosive as She’s Building Castles in Her Heart , a little masochistic for their tastes. Those, however, who have followed Hinson’s career since 2004’s debut, The Gospel of Progress, will be relieved by a compelling return to Gothic American themes which repays their early conviction that he is a unique songwriter capable of converting lyrical gloom into musical glory. 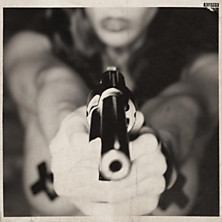