Striking debut from one of the most vital RnB forces of the 00s.

Kaleidoscope was not simply the first time many heard the smoky, rich voice of 20-year-old Harlem-born Kelis Rogers; it was also their first encounter with the wizardry of young production team Pharrell Williams and Chad Hugo, aka The Neptunes. This marriage of the two creative forces forged an album that rewrote the RnB rulebook.

With Kaleidoscope, Kelis appeared as if from outer space with her shock of brightly coloured hair and sang with experience seemingly beyond her years. The Intro sends up the autobiographical skits of the era: we hear a minute or so of nostalgic mumbo jumbo, when she cuts in with, “Yeah, yeah, and now I’m grown up”. Kelis retains this sassy forthright attitude throughout the album.

There is no formula here – considering its time, Kaleidoscope offers little sultry swing beat or neo-soul, instead featuring The Neptunes’ acoustic hip hop beats with their touches of otherworldly, Middle Eastern and Arabic influences. Caught Out There broke Kelis in the UK, with its “I hate you so much right now” refrain – it still steals the show today, and was one of those songs that was heard everywhere at the time. Ghetto Children, which features Williams’ and Hugo’s band N*E*R*D, is swooning, urban RnB that owes something to the Fugees. Although it dabbles in a lot of genres, Kaleidoscope sidesteps cliché – the doo-wop heavy soul of Suspended, the AOR of Mars, and the sing-song strangeness of Mafia all possess sufficient individuality.

Williams and Hugo would soon be ubiquitous, writing and overseeing a run of era-defining records for the likes of Snoop Dogg, Justin Timberlake and Beyoncé; but for a while it looked like Kelis would forever be the “I hate you so much right now” singer. In 2003 she broke free from any such typecasting with the release of her Milkshake single, and in doing so confirmed her reputation as one of the premier vocalists of the 00s.

Kaleidoscope is a perfect combination of a young, ambitious singer and a production team unafraid to experiment. To that end it is one of the most exciting albums of its time, and although subsequently emulated it still sounds fresh and surprising. 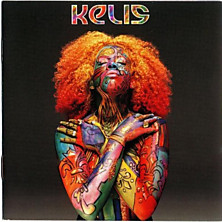