A neat summation of a singular vision, the likes of which we will not see again.

When Ronnie James Dio died in May 2010, the world of rock and metal lost a genius, a gentleman and perhaps its greatest voice. During a career which spanned a staggering six decades, Dio became a central figure in Rainbow, Black Sabbath and, of course, Dio the band, three of the most highly regarded and influential outfits in rock history. Mightier Than the Sword offers a glimpse at some of the highlights.

Dio has been the subject of more retrospectives than most rock singers, and this latest collection distinguishes itself only in that it touches upon his career before he found fame with Rainbow in 1975. Sequenced chronologically, it kicks off with one track from Elf, Dio’s first hard rock band, and the whimsical Love Is All, a number from then ex-Deep Purple bassist Roger Glover’s 1974 concept album The Butterfly Ball and the Grasshopper’s Feast. From this point onwards, it’s a predictable if thoroughly enjoyable ride.

It was whilst supporting Deep Purple with Elf that Dio was discovered and subsequently recruited by guitarist Ritchie Blackmore, soon to depart Purple to form his own band and in need of a vocalist worthy of his weighty compositions. Blackmore’s pseudo-classical bombast and Dio’s soaring voice were a perfect fit and the three studio albums they recorded together are all represented here. Even today, epics such as Catch the Rainbow, Gates of Babylon and the simply stunning Stargazer sound as scintillating as ever.

Dio’s move to Black Sabbath for 1980’s Heaven and Hell album was highly controversial but proved to be a masterstroke. The album is a stone-cold classic and its follow-up, 1981’s Mob Rules, is none too shabby either. In guitarist Tony Iommi, Dio had once again found himself a perfect writing partner. After splitting with the Sabs in 83, Dio later returned for 1992’s Dehumanizer – represented here by a single track – proving that much of the chemistry with Iommi remained.

Dio’s original departure from Sabbath was quickly followed by the formation of his own band Dio and the release of Holy Diver – one of three career peaks alongside Rainbow’s Rising and the aforementioned Heaven and Hell. Dio never bettered Holy Diver, but the song selections here show a commitment to quality possessed by few of his peers. He ended his days reunited with his former Sabbath bandmates under the Heaven & Hell banner, producing 2009’s critically acclaimed The Devil You Know, also represented here by a single track, Bible Black. A neat summation of a singular vision, the likes of which we will not see again. 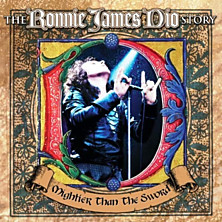