Another patchy solo album from the Black Sabbath legend.

Rock’s own Prince of Darkness has been living on borrowed time for so long that each new album he somehow manages to grind out is viewed as some sort of valedictory reckoning. With a loyal fan base, widespread public sympathy and the formidable power of the Ozzy brand working in his favour, we all cut the guy some slack. After all, this is probably gonna be his final album again, right?

Since his short-lived ‘retirement’ in 1994, Ozzy has issued just three studio albums, none of them anything to write home about and all pale shadows of his 1980s heyday. Despite a new line-up in his backing band and considerable effort expended to make up for 2007’s abysmal Black Rain, Scream is yet another disappointingly mediocre effort. You can cut all the slack you like, but a spade is a spade.

A key element of Ozzy’s long-term strategy has been periodic transfusions of talent. New rhythm sections are regular occurrences, new guitarists less so, but the six-string mantle does change hands occasionally. Ditching long-term axeman Zakk Wylde in favour of Greek guitar genius Gus G should have signalled a decisive dumping of the wannabe-contemporary Black Rain formula, but with producer/co-writer Kevin Churko still in place and all the material written before his arrival, Gus effectively had no creative input. While his real test as a suitable sidekick for Ozzy is still to come, he probably still feels like he’s won the lottery. And it’s good timing too, given the parlous state of his home nation’s finances. None of this, of course, changes the fact that Scream is a deeply ordinary showcase for the new guitarist’s prodigious skills.

In truth, all of Ozzy’s solo albums are patchy, but Scream lacks the killer that drowns out the filler. When lead-off single Let Me Hear You Scream is the most dynamic song on offer, you know you’re in for an uneventful ride. Surely the rock’n’rollercoaster that Ozzy has ridden for over four decades can’t flat-line on its final stretch?

Stitched-together songs, overproduced vocals and mountains of mid-tempo sludge; this is what happens when musicians decide they need to sound ‘relevant’. 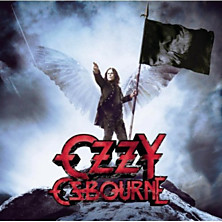