Few will grow tired of these intimate songs living in their headphones.

For an album recorded in separation and distantly pieced together over a Canadian winter, there’s a surprising warmth and assurance to be found in the 11 tracks that make up Untogether.

The debut album from Montreal duo Blue Hawaii, it follows their Blooming Summer EP, released by the scene-setting Arbutus Records in 2010.

From that EP, standout track Blue Gowns exposed their strong and starkly vivid gift for creating pure pop out of the lowest of moments. On its release, however, vocalist Ra returned to her role fronting Braids, while co-creator Ag moved to Europe.

But while most of us were nursing hangovers and regrets, New Year’s Day 2012 in Vancouver marked the start of something for the duo as they began work on a full-length. Writing and recording until the break of summer, they’ve produced a strong and mature return.

With the pop influences lessened, Untogether thrives on introspection to the point of claustrophobia. This was an album built for headphones. Spacious and bass-heavy, there are moments that are felt more than heard.

The opening samples of Sweet Tooth dart from left to right, while fluttering beats that sound like scissor snips do as they please. The low-end on following track Sierra Lift is so heavy it shakes the speakers.

However, the crux of the album lies in the two-part In Two, the latter half of which makes you want to simultaneously lose yourself while begging someone to please find you again. Ra delivers a sighed, “It doesn’t hurt… It only makes you sicker, than me.”

It might’ve been easy to compare Blue Hawaii to their Arbutus labelmates, be it the vocal distortion of Grimes or the beat twisting of Doldrums. But Ra and Ag have produced something entirely their own, far more melancholic and sedate than their contemporaries.

Untogether is an album to escape into. A world of its own pain, comfort, and sentiment, it’s more coherent and succinct than its distant formation suggests. Fluid and at times utterly beautiful, few will grow tired of these songs living in their headphones. 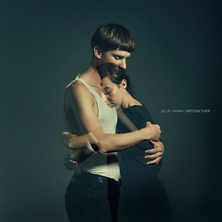