A trip to the movies with The King himself is, in conclusion, a roller-coaster ride...

Prepare for a spectacular trip down memory lane - here we have a 40-song extravaganza celebrating The King's finest movie moments. The snake-hipped superstar was in no fewer than 31 films - and while this album conjures visions of Elv wiggling about on Hawaiian beaches surrounded by flower-laden lovelies, a few tracks inevitably bring back that tinge of embarrassment which sometimes flickered across the pretty face of Prince Presley in his cutesier movies. High art they weren't, but feelgood they were, and these sunlit songs can still work their magic.


Disc One starts with a handful of Elvis classics - from the glistening romance of ‘'Love Me Tender'’ to '’King Creole’' - hurtling through '’Teddy Bear'’, '’Jailhouse Rock’' and '’Treat Me Nice’' in between. The subtle wave of cringe descends slightly with a couple of numbers from G.I Blues - the song of the same name would be quite groovy if those twee male backing singers would stop chirruping 'hup, two, three, four'.

Blue Hawaii's '’Can’t Help Falling In Love’' is still the perfect ballad - full-bodied, warm, melancholy and twinkling with that special Presley magic. Sigh...
The spell breaks soon enough though, and vintage Elvis this track may be, but '’Return To Sender’' still doesn't do it for this reviewer. Maybe it's the jaunty treatment of a hopeless situation, perhaps it's that sax, mindlessly 'doopy-dooping' away. None of this is Elvis' fault of course, but it's not the high point of the album.

It Happened At The World’s Fair may not have gone down in the annals of Hollywood history, but it gave good soundtrack: The sweet '’One Broken Heart For Sale'’ sees our hero again portrayed as the lovelorn hunk at the mercy of yet another capricious girl - swoon-inducing stuff. No wonder the chicks went crazy.

On disc two '’Little Egypt’' slinks up to you - a sexy doowop strut with a raspy sax. This little tale from Roustabout describes a saucy dancer who leaves her racy life behind when she marries our singer: A feminist's nightmare, this one.
The raggy '’Frankie And Johnny’' is also packed with raunchy excitement, but Clambake's title track (they loved clams, didn't they? ‘'Do The Clam'’ is on here too...) is twee enough to cool anyone's ardour. Especially that chorus: 'Mama's little baby loves clambake, clambake...' Hmm.

Luckily the universally beloved ‘'A Little Less Conversation’' is around the corner - this is the cool, sexy one even Elvis-snubbers can't not dance to. A trip to the movies with The King himself is, in conclusion, a roller-coaster ride through romance, betrayal, passion, raunch and clambakes. Just stay on the lush magic carpet of his voice and you'll fall in love all over again. 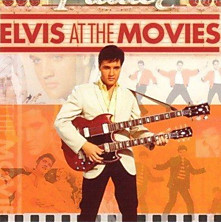