Pretty electro from Glasgow which suffers from stunted imagination.

Being able to take the cold and unemotional and give it warmth is something quite a few electronic musicians attempt, but not many achieve. But Glasgow-based producer Julian Corrie, AKA Miaoux Miaoux, certainly tries with Light of the North.

It helps that Corrie’s unaffected voice laments or celebrates over his uncomplicated soundscapes. While not tonally memorable, it brings to mind Alexis Taylor's vocals for Hot Chip, and can turn a mildly diverting dance track into one with an emotional hook to reinforce it.

There are hints of chaos underneath the polished surface, like the cacophony that ushers in opener Sweep Clean – though it quickly veers into pleasant pop territory, like a more ship-shape Postal Service. Later, Hey Sound! deviates from previous structures, resolving into a club-threatening chant with a throbbing backdrop.

There are some lovely little melodies pinging around this collection. Generally they're guided by gentle guitars, while auspicious electronic sounds swarm around them. But here's the thing: nothing sounds particularly vital to these songs. Each pleasant flourish and backbone beat could be replaced, with the impact of the piece in question unlikely to be altered.

It's often said that if a song can be stripped back, and not lose anything, then it's a great song. But that may be a fallacy. A song lives as much by its final incarnation, as by its origins; you can play three chords and come up with something you've heard before, but it's not the same.

Miaoux Miaoux puts sounds together that are reminiscent of other works. It's nice enough, but is it going to soundtrack your life? No. Does that mean it shouldn't exist? No, but it's merely a pretty diversion – one which sounds great, if you hadn't already heard these particular tricks mastered by others. 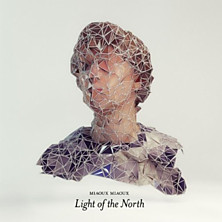