Lopez possesses both a lightness of touch and the confidence of a natural diva.

More than many, more-fêted stars, Jennifer Lopez seems emblematic of 00s pop: slick, blinged-up, powerful and ambitious enough to overcome such peasantish problems as a lack of innate aptitude for the form. And, for a while, her attitude worked to superb effect: she's the quintessential "more great songs than you initially assume" artist, with Love Don't Cost a Thing, Whatever You Wanna Do, If You Had My Love and – best of all – the Murder remixes of Ain't It Funny and I'm Real all high-water marks. But even her most passionate defenders couldn't have expected her to be relevant in 2011, with her most recent material seeming to indicate a decline of interest on both the public's part and her own.

Yet this year has found Lopez reclaiming number one spots worldwide – thanks in no small part to her latest iteration as all-caring, all-crying judge on American Idol. And so to the eventual emergence of Love?, an album that's undergone the tortuous gestation seemingly now de rigueur for any pop star beneath the Beyoncé level. In that time, Lopez has clearly been taking copious notes on her rivals. From RedOne to The-Dream, she has hired across the spectrum of this era's pop producers du jour, and much of Love? finds her slipping discreetly into others' lanes: Good Hit mimics Ciara's kittenish sneer, Invading My Mind features the same combination of heavy, dubstep-influenced basslines and bubblegum-light melody as found on Britney Spears' latest album, and Hypnotico not only nods to Gagaist electro but is co-penned by the lady herself.

The same quality is both Lopez's strength and weakness. She possesses both a lightness of touch and the effortless confidence of one of nature's own divas, which means that whenever she hits the floor to essay up-tempo swagger tracks she convinces without being as overbearing as, say, Ke$ha. And of course the woman who gave us the supreme millennial house of Waiting for Tonight will know her way around On the Floor and Papi, both apparent distillations of the trashy Miami house aesthetic that dominates pop these days. But while Lopez has claimed that her new public image showcases the real her, she never could pull off the idea of being a real human being with actual emotions on record. Too much of Love? seeks to showcase her vulnerability and depth of feeling – but while Lopez's insouciance can be affecting, the same isn't true when she tries her hand at the epic sweep of Until It Beats No More or One Love. 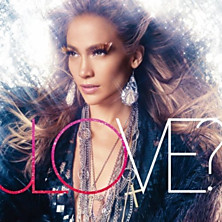