An understated ‘debut’ collection from the sometime Get Cape man.

Signed to a major label as Get Cape. Wear Cape. Fly before his 21st birthday, Sam Duckworth and his renaissance man indie seemed set for big things in 2006. As we know, things didn't go quite to plan. None of Get Cape. Wear Cape. Fly's three albums reached the top 20, the musical climate turned against sensitive singer-songwriters with a political undertow, and he was swiftly jettisoned to the independent sector – which had always been his natural home.

Whether Get Cape. Wear Cape. Fly are trundling on remains a moot point, but with his first album under his own name, Duckworth has bought himself some time here. As he rightly notes, The Mannequin doesn't sound quite right for Get Cape. Wear Cape. Fly and not merely because there are precious few electronic loops: it's too twinkly, too unassuming and, despite an all-new band, too spartan.

Curiously, for all the suggestion that it may be a side-project, The Mannequin sounds more like a re-emphasis of Duckworth's gifts as a straight-forward songwriter. His voice remains a great comforter, whether sailing above the almost countrified 8888 or pledging guarded subservience on a title-track punctuated by the slinkiest guitar riff of his career. There are hints of early Pink Floyd on the echo-laden Nights, which sneaks in some Spanish guitar right at the end. The Miracle of Science sounds like it's performed by ghosts, and you could half-imagine Clementine featuring in a talent show.

Pick of a sweet-natured bunch is 18 to 1, a tale of youthful reverie, a lovelorn homage to Duckworth's Essex heartland (his accent suddenly goes dahn the Thames estuary too) which sees him jostling with a "modern day Marlon Brando with the eyes of James Dean" and taking what seems like an awfully long walk "through Barking, through Thurrock, to the sea". It's all rather lovely.

Sometimes you wish he'd beef things up a little – those seeking a change of pace will seek in vain – but while The Mannequin's beauty may be understated, it's enduring. Still only 25, the big time may have already passed Duckworth by – but he now has the base for a long-term career. 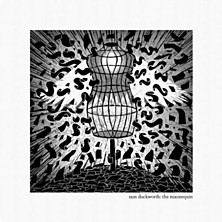