Wilfully eccentric and endlessly entertaining debut from the Manchester quartet.

“I was making music in my bedroom [during my childhood]. My one rule was not to sound like anyone else.” Judging by his band’s debut album, lead singer Jonathan Higgs rarely had to send himself to the naughty step.

For while you might detect an occasional Yeasayer bass noodle or lei-wearing Vampire Weekend riff, this Manchester quartet flee from any identikit indie clique, throwing ever-changing, protean sonic shapes. They career between time signatures, changing keys and genres – often within bars, let alone songs – as they playfully elude categorisation.

Telling of teenage terrorists, war, homicidal lovers and the human condition, they leap and crackle, Jonathan’s voice a frenetic falsetto bounding like a Labrador on speed, to twisted brass fanfares or military stomps that challenge you to dance then trip you up. They grow wistful and sing in sync to a line of Baroque harpsichord (Two for Nero), or, on Schoolin’, drag you through as much terrain (pop, electro, jazz, funk, prog… and, er, whistling) as the most self-indulgent of Yes epics – but without the soporific effect.

Even on the relatively simple QWERTY Finger, which has an innocuous handclap-and-drums opening, they give us a rushing euphonic mash-up of scaling synths and chasing vocals, before turning and returning, pausing midway for an anthemic break, complete with yelping. Yet this track not only sounds coherent, it’s glorious – despite the fact that here, as on much of Man Alive, the boys seem to be stuck in the surreal environs of semi-consciousness, where Lewis Carroll is king. It’s a place where lyrics such as “So how will they remember us whole when we turn into salt / And it's mine, the fault, mine the dream, and the vein, home of whale-flesh, make soap out of it!” apparently make sense.

Whether they’re talking a load of gibber, spewing poetic profundities or playing auditory jokes (the criminally catchy chorus of Suffragette Suffragette demands a double take) it doesn’t really matter; it merely adds to their quirky brilliance. And it is brilliance. EE are wilfully eccentric, and endlessly entertaining, but they know more than most how to craft a song, how to make an album. They know how to give it depth, light and dark, and they – crucially – know when to stop. Give it a month or two, and the EE wannabes will start to queue up. Luckily for this band, soundalikes are not an option. 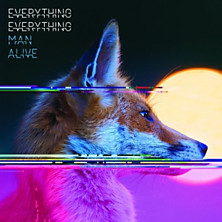