Shakey’s back with his 34th studio album.

Neil Young now belongs to that rare stratum of artists whose work is no longer judged purely on its merits but on the basis of its status within their catalogue. As with Dylan and Bowie, interest lies not only in whether the latest record stands up to repeated listening, but what it says about them within the context of their career. So when Le Noise was announced, most stories focussed on the fact that it sees the veteran collaborate with Grammy-winning producer Daniel Lanois, previously responsible for records from Dylan (of course), Peter Gabriel and Emmylou Harris, and who here has reduced Young’s backing to (mainly) electric guitar and Lanois’ own "sonics". It sounded like one for the musos.

But what this means is that when Walk With Me opens the album with one crunching, distorted chord, it sounds like Crazy Horse, his sometime backing band, are about to unleash hell’s fury. Instead, Young’s trademark impassioned whine insists "I’ll never let you down no matter what you do if you just walk me", while he chops out chords that decay like thunder, Lanois adding a few restrained vocal loops and guitar treatments. There are no drums, no hurricane solos and, it has to be said, no great signs of a melody. In fact this at first sounds as though Young is merely demoing new songs, feeling his way through them, trying to decide whether they would work better if they rocked with a band or instead reached back to the tender acoustics of Harvest. His research appears to have been inconclusive.

This being a Neil Young album, however, it’s worth returning to, and what initially appeared indecisive reveals itself as an experiment in the rejection of standard rock arrangements. Le Noise therefore remains reasonably accessible, Young’s lyrics still as appealingly forthright as his playing, his melodies slowly rising through the unsettling, growling dirge. Hitchhiker sees Young look back over his life atop a bare and formidable landscape; Rumbling is plaintive yet full of an urgent energy, Young’s voice vulnerable but resolute, while Lanois’ greatest contribution is arguably his general absence.

It’s not an easy listen, obviously, but acclimatisation to the unfamiliar, monochromatic sound of such raw electric guitar brings with it the ability to recognise that Young’s songwriting skills haven’t dulled with age. Examined as a part of his overall body of work, furthermore, it’s amongst the more fascinating left turns he’s made, and once again confirms the evergreen restlessness of this gnarly and frequently inspiring Canadian. Once again, he’s not let us down. 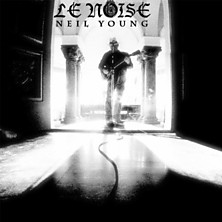