The LA band's fiery debut will probably always be their crowning glory.

Guns N' Roses were formed in 1985 and eventually signed to Geffen records after two years of hard graft (and, one suspects, just as hard playtime) in the rock clubs of LA. It was these two years of bawdy experience that would be the inspiration for their first album, Appetite for Destruction.

And this is what makes Appetite such an oddity. It inhabits a strangely hermetic place, concerning itself as it does with the scene in which the band were born, whether it be the band's girlfriends (Sweet Child O'Mine, My Michelle), their chemical intake (Mr Brownstone, Rocket Queen) or just LA, itself (Welcome to the Jungle).

Even the band's appearance verged on the parodic. While they were at odds with the prevalent glam metal stylings of bands like Mötley Crüe (with whom they toured) or Bon Jovi, the band themselves - all cowboy boots, bandanas and leather - hardly broke the mould. Yet they traded on a dynamic that balanced them between the lifestyle they portrayed and the no-nonsense kick-ass aesthetic of their sound. Punk metal was born.

And let's make no bones about it: this band could play. Steven Adler's drums sound huge, while Slash's riffs had yet to descend into cliché, his snarling Les Paul force-fed through a growling wah-wah. Axl Rose's cartoon squeal of indignation was the perfect summation of the band's philosophy of good times to be had living on the 'edge'. Appetite... never lets up. Never had hedonism sounded so good.

But perhaps the real innovation about this band was the way they were marketed. Having lost touch with their grass roots support while recording this album, it was David Geffen's intervention at MTV that saw their video for Welcome to the Jungle put on rotation, opening the wallets of middle America and, eventually, the rest of the world. This was metal for a new age of the media.

Of course, the band couldn't make a move without courting infamy. The original 'robotic rapist' sleeve by hot rod icon Robert Williams had to be withdrawn after protesters began to boycott the album. Re-sleeved, the album racked up sales of 25 million. It remains GN'R's crowning glory.

Whatever your thoughts on Axl and company today, on Appetite... the band was hungry, capable of turning on the fireworks and, most importantly, making a noise that your parents would detest. 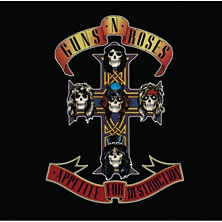