It’s interesting how a sound so British has beguiled so many acts from the USA.

If the numbers of pysch-folk and folk underground compilations released in the last couple of years are anything to go by, it seems we have an insatiable appetite for music whose principle qualities are both as tangible and as curiously ephemeral as smoke drifting up from a forest campfire.

Whereas Strange Folk, Gather in the Mushrooms, and other similarly bucolic collections blew the dust off tracks that enjoyed their first bloom of youth over 30 years ago, Psych Folk 10 gathers up a clutch of today’s tunesmiths and minstrels wandering the highways and byways of the internet age.

Yet you’d be hard pressed to discern any significant traces of the 21st century in the patina of these 21 tracks. So ingrained are they with the fey, bittersweet echoes of Vashti Bunyan, Donovan, Pentangle, Trees et al, most artists here would plausibly fit onto any of those venerable best-of compilations.

It’s interesting how a sound so British has beguiled so many acts from the USA. The music’s original character is altered and refracted through a prism of diverse and occasionally contradictory interests, resulting in a fascinating counter-factual of the folk genre. Espers’ I Can’t See Clear (from 2009 album III) gamely imagines King Crimson’s Robert Fripp sitting in on a Pentangle recording, whilst Woods’ Pick Up elevates reserve and hesitancy to a bracing art form.

Admittedly, some stumble in their enthusiastic aping of what’s gone before. Sam Amidon’s Way Go, Lily is unsettling in its rush to invoke Nick Drake’s shade, undercutting what might otherwise be engaging material. Closer to home, the raggedy amble of Alasdair Roberts’ You Muses Assist continues to plough more traditional timbres, whilst The Owl Service and Scotland’s Trembling Bells pull off a knowing, retro-fitted presence without sounding second-hand or too pleased with themselves. 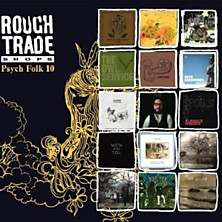