Breathless, for all its ultra-slick production, electro beats and pop hooks, is a...

These days success is often judged less on sales and more on a TV audience's pantomime reactions to unreal situations. Top of this list is the X Factor franchise with its brutal pit fight format of winner takes all – until the next year's winner comes along, of course. After that, you’re on your own.
Shayne Ward is at that exact point. Having sold two million copies of his eponymous debut and scored 13 worldwide number ones, he now has the unenviable task of trying to turn that success into a career, starting with this, the 'difficult second album'.

Breathless is an album that sums up the predicament of the reality pop star. Having taken the fast track to the big time, Shayne has no style of his own and is open to the whims of his production team.

That team are the Swedish duo Maratone, who have previously worked with Britney Spears, Kelly Clarkson and Backstreet Boys, so there’s no doubt that they know pop very well. Sadly, what they don’t seem to know is soul. Breathless, for all its ultra-slick production, electro beats and pop hooks, is a superficial and often vapid experience.

The problem is an over-reliance on hip-pop, the watered down and sanitised mainstream runt of the soul music litter, that makes the majority of what is on offer sound like a desperate attempt to jump on the coattails of the latest trend. It’s an understandable plan, given the inexplicable success of fellow X Factor alumni Leona Lewis, but it is one that falls far short of success. For instance whoever thought that an aping of Akon on the dire "If That's Ok With You" or the cynical attempt to bring Shayne down to his teenage audience’s level with the dreary "No U Hang Up" was a good idea needs their head plunged into a bucket of very cold water.

The exceptions are when Shayne reverts to the formula that made his debut successful, like on the title track ballad, or when the production team actually try something ambitious, as on closer "Tell Him", which swings around a sample of Vivaldi’s Four Seasons.

Eventually however the shortcomings of Breathless show us one crucial fact; the old ways of pop are indeed dead, but if this is the future, it might just turn out to be goodbye pop. 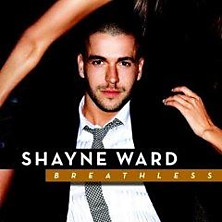