David Guetta Nothing but the Beat Review

Love him or loathe him, Guetta’s influence on today’s pop is incredible.

Five years ago, if someone had told you that American hip hop and RnB would be riddled with thumping mid-90s Eurocheese in the not-too-distant future, it’s fairly likely you’d have assumed them a tad misguided. Yet here we are, with dance and urban charts largely interchangeable, and the man responsible – in some considerable part, at least – is David Guetta, who continues his evolution from DJ to headline artist via his fifth album, Nothing but the Beat.

But the peculiar fusion of genres is, somehow, no longer that peculiar. With Nothing but the Beat’s arrival already heralded by the triumphant meeting of Flo Rida’s booming rhymes and the zesty, madcap stutter of Nicki Minaj on Where Them Girls At, Guetta’s production wizardry has amassed some gravitas.

The tracklist reads like a Now! album, from the usual suspects (Akon, Taio Cruz, Chris Brown) to marginally less obvious collaborations (Jessie J, Jennifer Hudson). The best results come when Guetta mercilessly rips artists from their comfort zone – take the aforementioned Minaj in songbird mode on Turn Me On, or Sia’s ghostly mandolin-esque vocals on Titanium more than holding their own on atop Guetta’s bed of frantic zips and twiddles.

And yet Nothing Really Matters, which employs a simpler, more unobtrusive beat alongside a pleasing string loop, contains every trite lyrical cliché imaginable courtesy of will.i.am. "On the floor"? Check. "In the club"? Check. "Party people"? Check. Bragging about pulling supermodels? Check. Asking the DJ to turn it up? Check. It’s by far the worst offender here, but hints at the overall lack of innovation Nothing but the Beat is guilty of.

A quick blast would suggest that each track’s identity is dependent on its featured vocalist, and while it’s true to an extent, there is some fluidity across Nothing but the Beat that solidifies it as an album. Whether you could go so far as to call Guetta an auteur might be pushing it, but it’s a cohesive effort, if not quite a work of art. And in terms of genre, it’s neither dance nor hip hop; it’s David Guetta. Whether that’s a good thing or a bad thing comes down to a matter of taste. 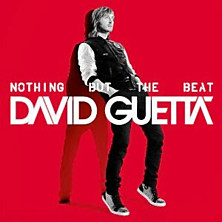