Debut album is worth the wait.

As vitriol-attracting stage names go, Emmy The Great is up there with the worst. Perhaps even more troublesome is the hype that’s gathered around Emma-Lee Moss in the four years she’s been working her way up from the indie underground. Lucky then, that her debut album is worth the wait.

The London-based singer-songwriter falls into the already crowded bracket of quirky, folky types interpreting the contents of their hearts with acoustic guitars, pianos and various twinkly extras. But First Love is a deceptive collection; while Emmy’s wavering, girlish vocals give the impression of a lightweight tone, her lyrics are unexpectedly heavy.

Take 24. Ostensibly a drawn-out moan about a boyfriend who watches too much Jack Bauer, the track blossoms into an epic existential crisis, lamenting, ''24 for every year that I have slipped day by day into the neck of the abyss’'.

Things shift stylistically too – moving from the sparse contemplation of Museum Island to fiddle-tinged Celtic folk on Dylan and We Are Safe. A foray into 60s-style sugar-pop on single We Almost Had A Baby is less convincing, and the overblown choral work of Easter Parade outstays its welcome long before the three and a half minutes are up.

The strongest indication of Emmy’s greatness comes in the title track; an intricate, winding work of near-brilliance, made all the more powerful by its reworking of what the singer herself attributes in the song as ''Hallelujah, the original Leonard Cohen version'’. It’s not quite a flawless debut, but a sign that great things are to be expected. 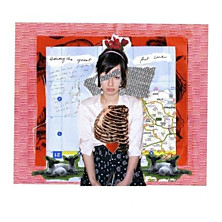