Harnoncourt has much to say about this sparkling work, and largely serves it well.

Surely a candidate for 2009’s most unexpected recording is this live concert performance of Gershwin’s ‘folk opera’ Porgy and Bess, conducted by period-instrument pioneer Nikolaus Harnoncourt.

In the venerable conductor’s 80th birthday year it marks the quick return of the apostle of authentic performance practise to the 20th century repertoire following Stravinsky’s Rake’s Progress in Vienna last year.

Recorded at the Styriarte Festival in Graz in July, Harnoncourt claims familiarity with the score since childhood and situates it emphatically outside of music theatre and squarely inside opera, describing it in his thoughtful and provocative booklet essay as “an American Wozzeck”. If the performance itself falls short of wholly justifying such an astonishing comparison, it nonetheless manages to surprise with a reading that is idiomatically alert and persuasively free-flowing, even if it never quite manages to ink in the febrile qualities of Gershwin’s ambition for the work.

Using the original 1935 score, Harnoncourt makes judicious (composer-sanctioned) cuts and includes some music, most notably the Symphony of Noise that opens the final scene, that was later jettisoned as Gershwin and his librettists, brother Ira and DuBose Heyward, struggled to find appropriate form and function.

Where Harnoncourt succeeds is in blending dramatic intimacy and scale –hence the three discs and a three-hour playing time – with a widescreen approach to the music that is exuberant and alive, orchestral details leaping to the foreground, textures polished and gleaming with new-spun vitality, and topped by luminescent choral singing.

Where he fails is in excavating down into the hot blood and sinewy gristle of the music; it’s all a touch politely precise. Jonathan Lemalu’s glossily-sung Porgy and the Bess of Isabelle Kabatu, a heartfelt Summertime aside, miss the pain and pathos that underpins the narrative, while Michael Forest’s Sporting Life lacks centre and sustained drive. Only Roberta Alexander’s Maria shines through, catching the full swell of Gershwin’s music to perfection.

But Harnoncourt has much to say about this sprawling, sparkling work and largely serves it well. The accompanying booklet notes are textbook perfect and add to the understanding and pleasure of this most challenging, and rewarding, of Gershwin’s operatic endeavours. 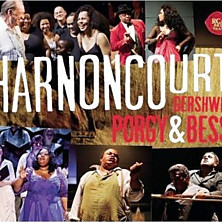