A collaboration reflecting on three decades of London’s music and culture.

Aside from dub and dancehall devotees, most of those sizing up In East London will have arrived here courtesy of 2010’s plaudit-winning Duppy Writer, on which Roots Manuva "met" Wrongtom.

In itself, this is a bit of a shame – Wrongtom has been conjuring on the decks since the 80s, following in the sound system tradition that has so influenced British music. Sadly, without the sharpness of Roots’ wit and the uniqueness of his voice, such musical tourists might think not to bother with this set.

But they should. Those who stick around are likely to lap up Riot Ting, the vocals for which were laid down in the wake of the UK’s 2011 summer disturbances. Its strutting brass, anxious lyrics and eerie vibe is dimly reminiscent of The Specials’ Ghost Town.

They’ll smile, too, when they hear At the Dancehall. It isn’t some thawed-out woolly mammoth of a track – it’s brand new, and yet still suggests so much about the roots of 90s garage and today’s omnipresent dubstep. MC Deemas J puts in his best performance here, the number of words he delivers per beat escalating until he’s thrillingly machine-gunning “Whuddha-boud-boud-whudha-bo-bou-whaddhabout-that.”

Though the vocals never reach that peak again, they’re steady and reliable throughout, Deemas J reflecting on three decades of shifting music and culture in his native London. The bass bounces, never deviates: slightly maddening, effortlessly cool. The fog of reverb evokes a certain late-night rooftop London, its strange fusion of timelessness and tension.

Part of the motivation behind releasing this in 2012 has to be nostalgia, but that shouldn’t make In East London irrelevant. A lot of so-called innovation loses its edge when you listen to a record like this, which in preserving a certain sound from a point in time that perhaps never was, helps you (the Manuva-trailing listener?) see how the seeds were sown for everything from Dizzee Rascal to James Blake.

And then, in the street noise that closes East London, it feels like a heartfelt lament for a raw, eclectic London that’s fading away before waves of new-build sanitisation. 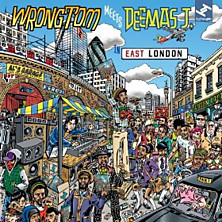