Ash The Best Of Review

A study of what might have been, and what was, which packs plenty of walloping choruses.

It's fair to say things haven't gone as Ash might have hoped when they emerged back in 1992 from the backwaters of Downpatrick, so young their parents had to sign their record contract and so fresh they practically invented pop-punk.

Fast forward and these days they spend much of their time denying an imminent split and, as if bored with the second tier, keeping themselves interested (and interesting) with such innovative ideas as an A-Z Tour (which, yes, was a tour which started in Aldershot and finished in Zennor, in Cornwall, taking in towns in alphabetical order along the way). Oblivious to the way the singles market is going, the band also released one every fortnight from October 2009 to September 2010.

Their problem is what happened in-between. For all the joy of their Ramones-like singles, they were overly dependent on Tim Wheeler as (almost) sole songwriter. Moreover, they never quite managed to build on that first flush of fresh-faced excitement, they never quite managed to make an unambiguously fantastic album, and they never quite managed to export their revolution. Tellingly they decided to stop making proper albums after 2007's knowingly titled Twilight of the Innocents failed to break the UK top 30, and this new set is actually their second best of. For the record, 11 of this collection’s chronologically sequenced 19 tracks, plus a pointlessly re-recorded version of Jack Names the Planets, appeared on 2002's Intergalactic Sonic 7"s, which also included a disc of B sides and rarities.

This new release's carrot to Ash completists is Teenage Wildlife, an Ewan McGregor-narrated documentary of their hedonistic early years – it’s featured on a DVD alongside all their music videos. But from an exclusively musical perspective, these tracks offer reminders of just how close they came to cracking it, especially early on. Girl From Mars, Goldfinger, Oh Yeah and Shining Light are pure pop pebbles of the highest order, with walloping scarf-waving choruses, taut verses, all infused with the sheer thrill of music making that has never quite departed.

Even so, an understandably and not entirely artistically destructive weariness seeps into the later material, notably the self-explanatory You Can't Have It All and the string-laden Twilight of the Innocents, but their more rueful side suits middle-aged Ash well. This may be a study of what might have been, but what Ash actually were (and are) wasn't bad either. 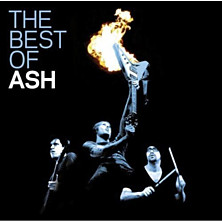