For many, the pairing of the words 'Phil Collins' and 'Love Song' will make them speed...

After a summer that has found all the highbrows giggling at the fact they liked Peter Frampton all along, here comes a real guilty pleasure. Given the amazing success of Virgin's The Platinum Collection, a straightforward rebundling of three Phil Collins' albums in a cardboard case, this new release is aimed squarely at the festive market; a handsome double disc collection of his most poignant love ballads.

For many, the pairing of the words 'Phil Collins' and 'Love Song' will make them speed for the sick bag with alarming haste. I'm not exactly sure how it happened - possibly it was his ubiquity, 'niceness' and, of course, that fax - but the respected, intelligent drummer that played on Brian Eno albums became marginally less palatable than Chris de Burgh. Collins, therefore, is often seen as the cipher for sell-out; the man who was Billy Cobham to our very own cut-price Mahivishnu, Brand X, less than ten years later was tarting around the charts as an MOR everyman to a generation who thought Genesis were his occasional backing band.

Yet let us not forget that tracks like "This Must Be Love" and "If Leaving Me Is Easy" are up there in sound and feel with some the greatest moments ofArif Mardin-producedsoul, and show Collins to be a writer and performer of depth and sincerity. Even fluffy puff like "Against All Odds" and "One More Night" possess a quaint, slightly skewiff charm. Better still, the new track "Tearin' And Breakin'" -a co-write with occasional sparring partner, John Martyn -points to the very best of their collaborations, "Grace & Danger", and actually finds Collins off his recent auto-pilot doing his best Martyn impression.

For a lot of white rock boys of a certain age, Collins was the guv'nor;initially, his solo material was at least tolerated by the trendier crowd. I bought Face Value on the same day in 1981 as My Life In The Bush Of Ghosts. I saw no problem in that then, and I still see no problem whatsoever in at least 45% of the material here.

The rest: "Groovy Kind Of Love", "Two Hearts", "Can't Stop Loving You"...well, at least you'll have something to entertain your dad with this Christmas. 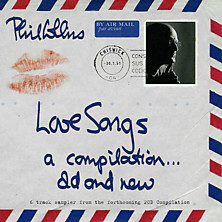