Free of anything in the slightest bit terrible, Head First is amazing stuff.

On their fifth album, the duo has put away the maypole and mummery of 2008’s folk-flavoured Seventh Tree, and rummaged through the box marked big synths, lasers, jumpsuits and all things shiny. And the results are all-out pop, gloriously so. Not that they haven’t expressed this side before, as the big choruses and winning hooks of the likes of Ooh La La, Caravan Girl, Strict Machine and A&E have shown in the past, but here they maintain the quality throughout a full album. Opener Rocket is a fine continuation of the above lineage. It couldn’t be more 80s if it arrived sweaty from a Jane Fonda workout, dressed in a neon legwarmers and a fashionably ripped Van Halen t-shirt. If it doesn’t knock the top ten for six, that’ll be a mystery for future generations to mull.

The album’s 80s qualities are particularly reminiscent of the turn of said decade – the stupendous Believer, with its stadium-sized chorus, appears like a turbo-charged Fleetwood Mac, and while Alive initially echoes The Feeling, it soon expands into a broader wonder evocative of ELO’s most-imperial phase. Even the title-track seems to take every horrible shoulder pad-recalling sound imaginable from a synth before dabbling in late ABBA fare. It’s not all fright-wigs, though – closer Voicething channels Stockhausen’s Stimmung to delightful effect, and a foxy frisson permeates Shiny and Warm. In fact, shiny and warm sums the whole album up.

At an economic 38 minutes and free of anything in the slightest bit terrible, you should welcome Head First like the first sun of spring, know it inside out by the time the band are slaying festival crowds mid-summer and possibly buying copies to give to close friends and family at Christmas. The word’s overused, but this album deserves it: amazing. 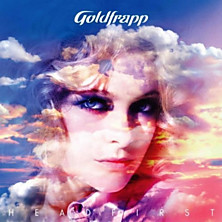