The sessions that spawned Davis's groundbreaking fusion album in their entirety, plus...

"I could put together the greatest rock 'n roll band you ever heard," boasted the legendary Miles Davis in the end of 1969. The then 43-year old Davis already had an impressive pedigree behind him as one of the great innovators in jazz, but at the time this must have sounded like a claim too far.

The pitfalls come in the form of tracks that would better have stayed in Columbia's vaults. Oddities like "Johnny Bratton," "Archie Moore," "Sugar Ray," "Ali," and "Little High People," sound like shapeless ramblings of clueless jazz musicians. They illustrate the words of Davis's producer at the time, Teo Macero: "the musicians didn't know what the hell they were doing."

Mercifully, the highlights are very good. One could question whether we really need six takes of "Willie Nelson," but especially on the earlier versions a storm is kicked up by John McLaughlin's heavily distorted and Hendrix-influenced electric guitar, Corea's weirdness on ring modulator, and Davis's own majestic trumpet playing.The leader'sunadulterated blues playing on "Go Ahead John," here showcased without the strange edits and effects on the originally released version, is also a sheer delight.

However good this material in its own right, it wasn't yet great rock 'n roll. Davis needed one more ace in his pack, and this came in the form of bassist Michael Henderson, who at the time played with Stevie Wonder. Together with Billy Cobham on drums, Henderson drives the boogie groove of "Right Off" to astonishing heights, and he sets the James Brown bass riff used on "Yesternow" in concrete. On top, both Davis and McLaughlin excel with some of the best playing of their career. Teo Macero rightly called this music (recorded on April 7, 1970) "dynamite" and in 1971 he compiled most of "Right Off" and "Yesternow" on Miles's A Tribute to Jack Johnson LP.

This set offers some precious extra material from this April session, and also traces Davis' next steps in May and June with music that had little to do with rock 'n roll; the ever-changing trumpeter was already on to new challenges. Yet to create, if only for one day, the "best rock 'n roll band you ever heard," was a remarkable and historic achievement. The Complete Jack Johnson Sessions is a fitting testament. Highly recommended. 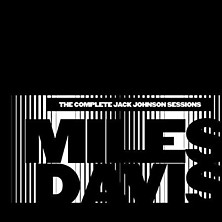