A great offering for those who missed it the first time around.

It is a wonder, if in 20 years time we will still be enthused by the hip-hop and rap music being produced today. Are any of them really classics? Will we still want to crank that Soulja Boy and 'super man dat hoe', in say 5 years? Okay, not the greatest example, but the point being, who now in this dire state of hip-hop will have made an impact musically, for us to care about in years to come? With the re-release of N.W.A.'s Straight Outta Compton, for its 20th Anniversary, the acknowledgment not only proves it's longstanding genius but allows new fans, who may only be aware of 50 Cent's dubious 'hell-raising' antics, to engulf themselves with the revolutionary sound that put gangsta rap on the map.

Originally released in 1988, Straight Outta Compton compelled the mainstream audience to see the hostile, underprivileged side to American living. N.W.A. did have an influential message. However, unlike Public Enemy’s rational Fight the Power ethos, these teenagers were angrily brazen about sticking up a middle finger while possibly waving a AK47 in the other hand, in their pursuit of free speech. With Dre and DJ Yella on productions, the tracks were written predominantly by Ice Cube, while Easy E and MC Ren contributed with delivering the rhymes. It would be the group's notorious mantra F**k The Police that would create the most mayhem, with radio bans and FBI investigations. Nevertheless, the album reached double platinum sales status, being the first to do without commercial support.

Highlights include, I Ain't the One, in which Cube hilariously confronts materialistic women, and, of course, Express Yourself. The only track not to use profanity.

Unfortunately, the added homage tracks by Snoop Dogg, Bone Thugs-N-Harmony's Mack 10, and WC seem futile and do not add value to this edition. In spite of this, it's still a great offering for those who missed it the first time around. And to improve the future, you must look into the past, as Dre proclaims: "you are about to witness the strength of street knowledge..." 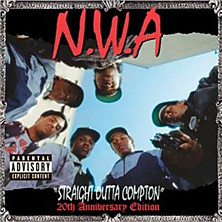